Private equity investment in Indian infrastructure is poised to pick up following a lengthy dry patch as debt-stressed operators of toll roads and other projects come under pressure from banks to offload assets to strengthen balance sheets.

This time, would-be investors such as KKR, the Blackstone Group and Macquarie Group are looking at buying into completed projects, a relatively safe bet, tempted by valuation expectations that have fallen roughly 25-30 percent over the past two years, fund managers and bankers said.

A previous wave of private equity investment in Indian infrastructure was often in early stage projects, many of which were bogged down by delays, eroding prospects for returns. Adding to their woes, developers are saddled with outstanding bank loans of roughly $200 billion. 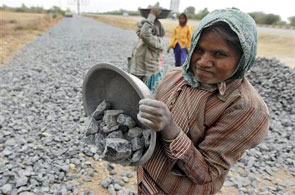 "Quite a number of infrastructure projects were excessively geared when they were built ... they are struggling to meet their debt obligations today. This is the opportunity for us," said Suresh Goyal, CEO of SBI Macquarie Infrastructure Fund.

The $1.2 billion fund, run by State Bank of India and Australia's Macquarie, in February bought a controlling stake in a road from debt-laden GMR Infrastructure.

"Many sponsors or developers do not want to and in some cases cannot support these projects and are therefore looking to sell. Many of these projects are good quality assets which comfortably fit our investment mandate," he said.

Among potential deals, NCC Ltd, which is backed by Blackstone, is in talks to sell its 51 percent stake in a 78-km (48-mile) toll road in the northern state of Uttar Pradesh to Morgan Stanley's infrastructure fund, sources with direct knowledge of the matter said.

The road has been generating revenue for two years.

GVK Power and Infrastructure is talking to funds to sell about 25 percent of its airport business by the end of 2013 and may also rope in an investor for its road building business, director Issac George told Reuters.

Another debt-heavy developer, Lanco Infratech, has hired Macquarie and Infrastructure Development Finance Corp to sell part of its power assets and some of its road projects, sources said. Lanco declined to comment.

If the deals come to fruition, it would reinvigorate a market that saw just $741 million in private equity money invested in Indian infrastructure last year, compared to $3.2 billion in 2011, according to deals tracker VCCircle. This year, the sector has seen $463 million worth of private equity deals.

"We will see funds taking stakes - including controlling stakes - in developed assets where risks are lower," said Raj Balakrishnan, managing director and co-head of investment banking at Bank of America-Merrill Lynch in Mumbai.

Private equity firms have shied away from Indian roads, ports and power projects in the last couple of years as the credit profiles of many builders deteriorated amid delays in project approvals or access to fuel for power plants. 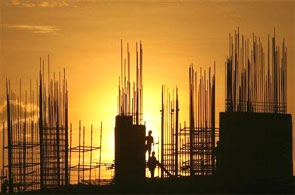 the end of March, up from 20.5 percent a year ago, Fitch Ratings said in a note.

"The infrastructure sector is likely to be the biggest risk for Indian banks in the year ending March 2014," it said.

Most Indian banks, especially state lenders such as State Bank of India and Punjab National Bank as well as top private sector lender ICICI bank, have heavy exposure to infrastructure, with some of them at the sector limit imposed by the central bank.

In the absence of mature bond market and banks' reluctance to lending more, equity is needed to fund infrastructure in a country infamous for bumpy roads and power outages.

Blackstone earlier this year called off its $111 million investment in Visa Power, which is building power plants, according to its website, after the company failed to meet certain milestones and other terms, according to a source with direct knowledge of the matter.

In their renewed infrastructure push, funds are demanding assurances such as a pre-determined rate of return over a fixed period. Most important, investors are looking at projects that are already generating cash.

"No private equity investor is interested in a company's project pipeline now," said an M&A banker with a European bank in Mumbai. "They are looking for completed projects that can make money over a reasonable period of time."

© Copyright 2021 Reuters Limited. All rights reserved. Republication or redistribution of Reuters content, including by framing or similar means, is expressly prohibited without the prior written consent of Reuters. Reuters shall not be liable for any errors or delays in the content, or for any actions taken in reliance thereon.
Related News: NCC Ltd, State Bank of India, Blackstone Group, Macquarie, GVK Power and Infrastructure
SHARE THIS STORY
Print this article