In a meeting with the commerce minister, India Inc hammered Sharma on the collapse of investments, structural nature of the current account deficit and stagnant growth in agriculture.

The much-awaited meet on July 29 to be presided by Prime Minister Manmohan Singh, it is learnt, is an outcome of an SOS sent by Commerce and Industry Minister Anand Sharma, who was apparently, cudgelled by captains of industry for the present condition of the Indian economy. 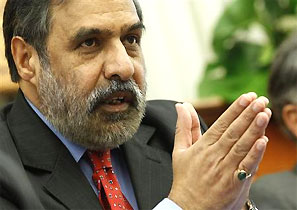 On June 28, prior to holding his series of meetings with business chambers and export promotion councils, Sharma called for a closed-door meeting with a selected few at the capital’s Taj Mahal Hotel to gather critical inputs.

The meeting, which went on for a little less than three hours at Taj Hotel's luxury restaurant ‘The Chambers’. The agenda was how to revive manufacturing and how to boost exports and investments. By the end all that was left was exasperation and exhaustion from both sides, as industry piled on the government. Yet again, no solution was found, but another date for another meeting was fixed.

One of the invitees present in the meeting told Business Standard the verbatim proceedings which led Sharma to hustle a tocsin to the PM.

meeting. Industry is now genuinely fed up,” said the person, who refused to be identified for obvious reasons.

During the meeting, Sharma had to face some embarrassing questions in many words: “Why are we having crazy laws like the land acquisition law?” or “Why is companies’ law trying to fix something which is not broken? Why cannot the management be trusted?”

The volley of questions was not over when one industrialist raised questions on the defunct state of the Employees’ State Insurance Corporation (ESIC), when there are better options for guaranteeing insurance to employees.

Another industrialist seemed intrigued with the role played by the Securities and Exchange Board of India (Sebi). He asked Sharma whether Sebi is a “promoter (of investments) or punisher.”

Some gave him long commentaries on project clearances and the difficulties faced by them in the ministry of environment and forests.

Someone else pounded on Sharma, just back from a hectic Europe trip, on the business of budget cuts. His rationale was if the government is resorting to huge expenditure cuts, then it is naturally cutting into capital expenditure and not revenue expenditure.

“Only, by cutting capex you are going to erode future growth,” one of the industrialists said, adding Indian industry’s capex has fallen to 13 per cent of the total expenditure at present from 21 per cent previously.

The representatives of industry even recalled their meeting with then finance minister Pranab Mukherjee, whom they met in August 2011, after the 2008 crisis and the “tall promises” made at that time by the government.

Industry was also critical of some of the recent moves by DIPP and the Drugs Controller General of India regarding allowance of foreign direct investment in the pharmaceutical sector.