News
Business
Movies
Sports
Cricket
Get Ahead
Money Tips
Shopping
Sign in  |  Create a Rediffmail account
Rediff.com  » Business » How you can reduce your water bills

How you can reduce your water bills 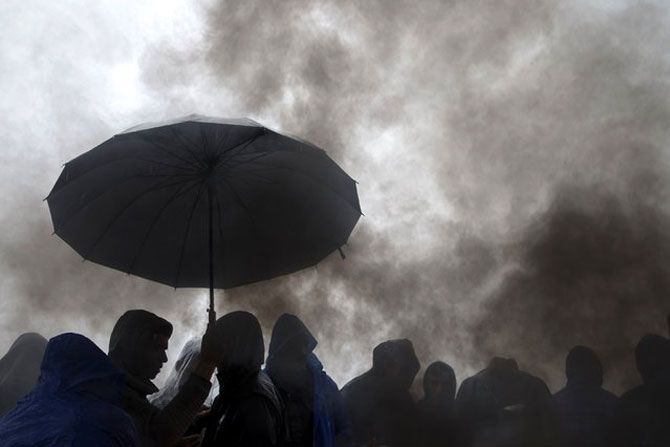 Three years ago, Chamunda Classic Housing Society in Dahisar, a suburb in Western Mumbai, faced a severe water problem. The society’s borewell was guzzling too much money and electricity.

Rising bills - from Rs 10,000-12,000 a month to Rs 25,000-27,000 a month - were creating a lot of conflict amid members. And when they continued to hurt after the meter was changed, the society members decided to install a rainwater harvesting system.

Percolation pits were dug around the borewell. The society also connected the down water pipes from the terrace of the building to these pits. Once the rainwater collected in these pits recharged the borewell, it was possible to pump water more easily. This brought down the electricity bills and also reduced the dependence on water tankers. The saving was around Rs 5,000 a month.

Chamunda Classic’s problem is getting more and more common in Mumbai and other cities. Many housing societies in Mumbai of late have been purchasing tanker water from private suppliers.

Subhankar Mitra, local director — JLL India says in a recent report, “According to the Bureau of Indian Standards, the average water requirement in urban areas is about 100 litres per person. However, changes in urban lifestyles have given rise to a much higher per capita water demand. For example, the increase in dual-car ownership households has resulted in requirement of water for daily washing of cars doubling."

The solution is rainwater harvesting. In fact, while both Maharashtra and Rajasthan have been facing drought-like situations, the latter’s water conservation through rainwater harvesting has helped villages get surplus water despite the lack of rains.

And doing it isn’t very complicated either. It requires pits in the ground or pipes from the terrace to collect rain water, a filter for treating the water, a tank to collect the water and a borewell to draw out the water. It can reduce dependence on supplied water by up to 40 per cent.

The cost for setting up Chamunda Classic’s rainwater harvesting project was around Rs 50,000-70,000 to dig the pits and fill them with gravel, mud and stones. It is possible to set up a rainwater harvesting plant for about Rs 100,000-150,000, not including the borewell, says Sachin Jadhav, a former resident of the society.

Jadhav, who now stays in Ratnagari, says that even in rural areas farmers incur huge cost in digging borewells deep to draw water. But instead if rainwater is collected and used to recharge borewells, this cost will come down drastically.

The experience of Bhagyashree Kelkar’s housing society in Mahim is similar. Six years ago, the annual water bill almost doubled to around Rs 700,000, from Rs 300,000-350,000, due to the increase in water consumption.

Then the society, which comprises 120 apartments, got two ring wells dug for about Rs 40,000 each. These wells were then connected to the portion of the water tank that supplies water to the toilets.

Kelkar says, “Fortunately the water tanks in our building already had separate compartments for water to the toilets, so we were able to connect the ring wells to that compartment. Now we use rainwater for the toilets, washing cars and gardening."

Kelkar’s society has not dug pits in their premises so far. But doing so will definitely improve the quality and quantity of the water in their ring wells, she says. “We were told that for our society we would require six to seven small pits and one big pit. The cost for which would be a total of Rs 150,000. Since we have a lot of open space, the ring wells are getting recharged on their own. But, percolation pits will help conserve more rainwater," she says.

AluzZa Eco Tech is a firm that provides rainwater harvesting technology and has worked with several residential housing societies in Mumbai and Pune. Azim Penangwala, of AluzZa Eco Tech says the cost would not be more than Rs 200,000-300,000, which in a society of say 100 apartments, will work out to not more than Rs 2,000-3,000 per flat.

Since housing societies in cities may not have enough open space to dig percolation pits, Penangwala recommends tapping the water from the building’s terrace or rooftops. In this case, the pipes that carry water from the terrace are inserted under the ground and connected to the water tank. A filter is installed before the water enters the tank.

If the water is of good quality then a carbon filter is used, otherwise a sand filter is used. This filter is cleaned and replaced once in three years. If the society has a borewell, the excess water after the tanks is filled is automatically diverted to recharge the borewell.

“The major cost is drilling the ground and laying the water pipes underground. We advise this because if the pipes are laid above the ground, they could get damaged," he says.

Rainwater harvesting for your society