Old banks get make over with gen X

Executives are dusting down the musty corner offices at private banks and spearheading a quiet revolution in the way they function. 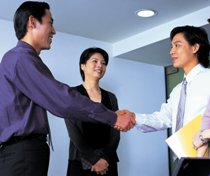 'Sleepy' is an adjective often used to characterise the country's old-generation private sector banks. But that description does not go down well with P R Somasundaram, the new CEO of Karur-based Lakshmi Vilas Bank.

"Most of these are good, sound banks with very loyal customer base. In the past few years, they have changed dramatically.b With better market positioning of their brands, the public perception will change, too," says Somasundaram, who spent eight years at Standard Chartered before moving to Lakshmi Vilas Bank this month.

He has a point. A quiet revolution has been brewing in the country's 15 old private sector banks.

Often criticised for being insular and inward-looking, they are uncharacteristically hiring the best banking talent, upgrading their technology, expanding their capital base and geographical reach, as well as entering whole new areas of financial services.

Indeed, the spate of high-profile hires over the past few months could help them shed the sleepy image sooner rather than later. Sure, they might not seem like a natural destination for senior foreign bankers, but Somasundaram is at the vanguard of a burgeoning breed of executives dusting down the musty corner offices at old private banks.

They include Shyam Srinivasan, who heads consumer banking at Stanchart in India and has been named the new CEO of Kochi-based Federal Bank, one of the largest old private sector banks.

Vishwavir Ahuja, who spent eight of his 27 years at Bank of America as CEO for India, has joined Ratnakar Bank, the unlisted Kolhapur-headquartered lender with 87 branches.

Banks that escaped the two rounds of nationalisation 1969 and 1980 are classified by Reserve Bank of India as old private sector banks.

Most of them are community-based and have been completely overshadowed by newer and more aggressive private banks such as ICICI Bank, HDFC Bank and Axis Bank, who started out in the 1990s.

So, what motivates these honchos to give up their decidedly more glamourous jobs with foreign banks, both in India and overseas, and move to small lenders, usually based in smaller cities like Thrissur, Karur and Kolhapur?

"While global banks give you great training and fantastic exposure, you are part of a system. And if you want to make a real difference, it is hard to notice that difference," says Murali Natarajan, who quit as Global Head for SME Banking at Stanchart last year to take charge of the only loss-making private sector lender in the country, Development Credit Bank.

For Ahuja, it was a chance to push the financial inclusion agenda from the grassroots. "At an MNC, unless you are sitting in the global headquarters and driving strategy, your job is basically execution, even if you are the India CEO," he adds.

"This is an even bigger opportunity than RBI granting new banking licenses, since those banks would have to start from scratch," adds Kapoor.

Industry experts say the wake-up call for a lot of these banks was RBI's unveiling of a roadmap for foreign banks in India, which envisaged an increase in the maximum holding of a foreign bank in an Indian private sector bank from the present 5 per cent.

"Banks realised there would be significant investor appetite for well-performing banks, which would enable to them to expand their capital base, while keeping ownership intact," says Ashvin Parekh, Partner & National Leader of Financial Services at consultancy firm Ernst & Young.

Old private banks also have an eye on the consolidation looming in the banking industry.

Ever since old private sector lender Bank of Rajasthan announced in May it would be merging with ICICI Bank, the industry has been abuzz with rumours of more consolidations.

Old private banks, most of which are located in southern India, are seen as prime targets for bigger, capital-rich private sector lenders.

"The consolidation will depend on how regulatory policy evolves. But even banks keen on consolidation want to professionalise and upgrade beforehand to realise better value," says a former foreign banker who recently moved to a private bank.

While the opportunity for newly-minted CEOs of old private banks is huge, transforming a bank comes with its own set of risks.

"The bigger your balance sheet, the greater is your capacity to absorb shocks. For small banks, one or two bad years or one or two large NPAs can change their fate," warns E&Y's Parekh.

For instance, cooperative society-turned-bank DCB, which tried to engineer a turnaround with a thrust on unsecured loans under a new CEO in 2004, ended up booking heavy losses when the economic cycle turned in 2008-09.