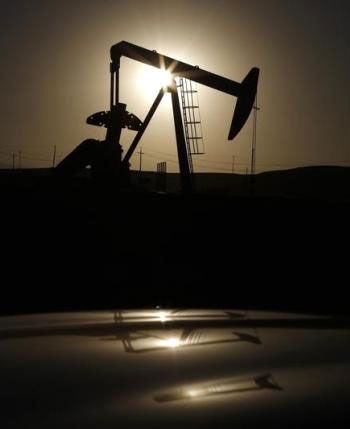 Tens of millions of barrels are struggling to find buyers in Europe with traders of West African, Azeri and North Sea crude blaming poor demand.

The deep disconnect between the oil futures and physical markets looks similar to the events of June 2014 when the physical market weakness became a precursor for a futures price crash.

"Being large physical buyers of crude we have a direct pulse of the market and feel immediately when it is well supplied, as is happening now," Dario Scaffardi, executive vice resident and general manager of independent Italian refiner Saras, told Reuters.

"In the short-term, futures prices do not necessarily reflect accurately the physical market."

Benchmark Brent oil futures prices more than halved between June 2014 and January 2015 after OPEC refused to cut output and instead chose to undercut more expensive producers, including a booming US shale oil sector.

But since January's lows of $46 per barrel, prices have risen back to $69 per barrel on Wednesday on fears the output in the United States would fall deeper than expected and on signs of a faster-than-expected demand rise across the world.

However, data from OPEC and the International Energy Agency show the world is still pumping 1.5 million barrels per day more crude than it consumes. Traders say they are seeing increased evidence of crude barrels struggling to find a home.

Traders in Azeri Light crude, usually one of Europe's favourite grades due to its high quality, said some 10 cargoes from the May tanker loading programme are struggling to find buyers, just two days before June volumes are due to go into the market.

As a result, the Azeri price premium to benchmark dated Brent is the weakest since December, when it hit a five year low.

In the North Sea, Norwegian Ekofisk crude fell to its weakest since August last year due to a significant number of unsold May cargoes, despite June programme already trading.

The worst situation, however, is in Angolan and Nigerian crude, which has struggled in the past two years due to the U.S. oil boom.

Traders said around 80 million barrels of Nigerian and Angolan crude oil are on the market with at least a dozen May-loading cargoes still available.

Indian refiners, which had bought large quantities of Nigerian oil in March and April, are now turning to cheaper Iraqi Basra and Venezuelan crudes.

There is no guarantee oil futures will definitely follow the physical market as they did after June 2014.

A number of unknowns could take oil prices either way. A failure to reach a nuclear deal between Iran and the West in June will reduce the likelihood of increased supplies from the Islamic Republic and therefore give prices some support.

The ex-boss of BP, Tony Hayward, said last month the withdrawal of capital and workforce from the U.S. shale oil industry was so steep that a new oil price bull market may come much quicker than expected.

Others argue that shale producers have become much more efficient in recent months and can switch production back on as soon as prices reach $70 per barrel.

On the demand side, the biggest unknown is whether China will resume buying large volumes of oil for its strategic reserve in the second half of the year.

However, an increasing number of market watchers agree that the fundamentals point to what should be a more bearish market, at least until either supply is cut or demand increases.

"We cannot help but compare the current price strength to the myth of Sisyphus," said Tamas Varga from PVM oil brokerage.

"The top of the current bull mountain might not be close but unless there is a fundamental change in the physical supply/demand balance, the rock might start rolling back down shortly again just like it did in the second half of 2008 and 2014 only for the bulls to start the arduous uphill battle all over again".

© Copyright 2021 Reuters Limited. All rights reserved. Republication or redistribution of Reuters content, including by framing or similar means, is expressly prohibited without the prior written consent of Reuters. Reuters shall not be liable for any errors or delays in the content, or for any actions taken in reliance thereon.
Related News: OPEC, North Sea, Azeri Light, PVM, International Energy Agency
Print this article