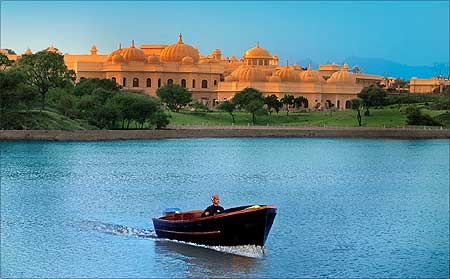 The Oberoi Udaivilas, the luxury hotel in Udaipur, has been ranked the best hotel in the world with the highest overall score of 94.36.

This recognition for The Oberoi Group is acknowledged as one of the most revered rankings in the international travel industry, said a media release from the hotel.

Nancy Novogrod, editor-in-chief of Travel + Leisure said, "This year's results underline Travel + Leisure readers' ever-increasing embrace of global travel in their search for distinctive and authentic experiences. The extraordinary rise of India among the top hotels and resorts in the world is one sure reflection of this tendency, with The Oberoi Udaivilas ranking number one hotel in the world, and The Oberoi Amarvilas and The Oberoi Rajvilas coming in at 10 and 11 overall."

P R S Oberoi, chairman, The Oberoi Group said, "I am happy and proud that an Oberoi hotel has been ranked the best in the world. This is a significant landmark for Indian tourism and will further encourage tourists to visit the country".