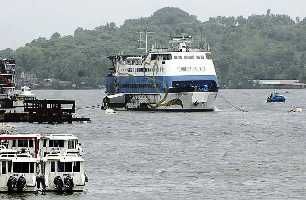 Goa's tourism sector has got a new attraction with luxury cruise boats being introduced for the first time in river Mandovi across Panaji for commercial use.

The company has introduced motorised boats in Mandovi river, which is the major river in the coastal state, with vast picturesque backwaters.

"The concept is to show other side of Goa which is not beaches," Desai said.

Tourists can now charter a boat and spend time cruising the river line which has on it's bank several villages, Old Goa heritage monuments and islands.

"Comfort is the hallmark of entire experience.

“Boats are built to ensure that person in it is highly safe and also enjoys the best of cruising," said Joe Ralph, Project Manager, Floating Cruising River Residencies, a company which has constructed these boats.

Image: Casino Royale Goa, an off-shore casino on a ship, is anchored on the Mandovi river, which runs through Goa's capital Panaji; Photograph: Reuters