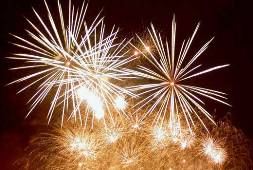 For, after a temperamental period in 2008 and 2009 on account of the recession, corporate biggies have finally started loosening their purse strings and placing orders for high-end gadgets like iPods, digital photoframes and dual-SIM handsets to dole out to their employees as well as clients.

"While orders from the information technology sector -- which contributed 22 per cent to the overall corporate gifting industry in the country during the last two years -- have come down, there has been a tremendous business from automotive, cement and other heavy industries for the ensuing New Year.

Orders from business process outsourcing, within the IT sector, are growing. We have received an order for 20,000 iPods from a BPO company and 550 pieces of dual-SIM mobile handsets (Samsung and Micromax) from another for this 2010 new year," says Phani Raj, managing director of Hyderabad-based eYantra Industries.

The Indian corporate gifting industry is currently pegged at Rs 5,500 crore or Rs 55 billion (both organised and unorganised), and is expected to grow 35 per cent in 2010. Of this, new year gifting is likely to account for 10 per cent.

Phani Raj says no cement company had gone for advertising or initiated brand-building exercises between 2004 and 2007 as even before their production was out, it was already sold due to the construction and infrastructure boom.

"With the real estate market in turbulence, cement companies are now looking at below-the-line activities to get visibility over other brands and recoup their market share, which is setting the tone," he adds.

Another player, Malvan Cunha of Elegant Novelties, says the company had seen a jump of 20 per cent in its business in 2009, courtesy the liberal spending by pharmaceutical companies on new year gifts. Elegant has Dr Reddy's, Uni-Sankyo Limited, Shantha Biotech, and FMCG firms like Marico India and Dabur as its clients.

"The trend is continuing for 2010 as well. While a handful of small-time companies are going for diaries, watches, travel and laptop bags and backpacks, the bigger ones are opting for gadgets and innovative articles. For instance, we are giving Gillette's battery-powered Turbo razors to Dr Reddy's, while asbestos sheets manufacturer Hyderabad Industries Limited has placed an order for 100,000 digital keychains.

"There are orders for 'Esprit' watches each worth Rs 5,000, Sony digital cameras and iPods as well," Cunha says. Phani Raj says pharmaceutical companies are likely to top the list of corporate gift givers in 2010 also.

With doctor prescription gifting being an evergreen business, the pharma sector will be the major contributor to this new year, he says, adding the heavy industries segment, including automobile, pharma, steel and cement would account for 28 per cent of the total corporate gifting in 2010.