Rustomjee Business School, promoted by realtor Boman Irani, stands tall on S V Road in Mumbai's Dahisar area. Just a year ago, it was the site of an equally impressive Mega Mart promoted by Vishal Retail.

Vishal, which opened the 21,000 sq ft store in 2007, closed it a year ago to stem losses. But, the 30 other stores that Vishal closed in Mumbai and the National Capital Region in the last year have not been so lucky -- they present a sad picture of deserted buildings, empty shelves and closed shutters. The company's losses mounted to Rs 120 crore in the third quarter ended December 2009.

Several other mid-size retailers who had big dreams have the same story to share. When the Mumbai-based Wadhawan group announced its food and grocery retail foray with Spinach neighbourhood stores in early 2006, the group had ambitious plans to set up 1,500 stores at an investment of Rs 1,500 crore by 2012 and break-even by 2009.

Today, the group has only 140 stores after closing 60-odd in the last 18 months. The group is now expecting to break-even by financial year 2011. But nobody knows how. What has gained momentum, however, is the exit of key people, that started with its first CEO.

The chief marketing officer and chief financial officer have also left and sources say they are a part of the 550 to 600 staffers who have quit in the last one-and-a-half years.

The big boys of India's organised retail, Kishore Biyani's Pantaloon, Mukesh Ambani's Reliance Retail, Aditya Birla Retail, RPG's Spencer's and Raheja's Shopper's Stop are shrugging off the slowdown and marching ahead, but it's the mid-level retailers such as Wadhawan, Subhiksha, Vishal Retail, Foodland Fresh, and others have taken a body blow.

Foodland Fresh, a Mumbai-based retail chain, closed all its 43 stores last year and Subhiksha and Vishal have gone in for corporate debt restructuring.

Experts say one reason the mid-sizers are struggling today is that they were in too much of a hurry to catch up with the big boys.

"They went into too many catchments too early. In the supermarkets business, you have to penetrate one market at a time and grow. Logistics and supply chain work when you are focussed,'' says a former chief executive of a Mumbai-based retail chain.

The over-leveraged expansion led to more problems. Vishal Retail President Ambeek Khemka told Business Standard in an earlier interview that "the only mistake we made was to grow our business through short term debt. The thinking was once we expand, have the top line, we could hit the capital markets again to fund expansion and retire short-term debt or convert it into long-term debt.''

And retailers did exactly that to increase valuations and raise funds. While operations at Subhiksha's 1,600 stores came to a standstill in early 2009 after the retailer ran out of cash and its debt mounted, Vishal could not service its Rs 735 crore debt taken for nation-wide expansion. Both the retailers are struggling hard to raise fresh funds.

Others also were in a tearing hurry. After starting the Spinach brand of neighbourhood stores, Wadhawan acquired Sabka Bazaar and the Home Store chain in NCR, S Mart in Bangalore, direct-to-home venture Sangam from Hindustan Unilever, and took over the management of Maratha Co-operative in Maharashtra.

"Even bigger guys expanded all over the country, but they have deep pockets to sustain losses, while a Vishal or Subhiksha don't,'' says Anand Raghuraman, partner and director at Boston Consulting Group.

Though Subhiksha tried to open a couple of stores on a franchisee basis in Chennai recently, the discount retailer is in the middle of petitions filed by its investors such as Azim Premji's Zash Investments and ICICI Venture and its lenders. Vishal's promoters are fighting with bankers over the issue of ceding management control even as successive joint lender meetings between the Corporate Debt Restructuring cell and its bankers remain inconclusive.

"Retail has become very expensive for new players given the high cost of real estate, people and operations. Anyone who enters retailing should be prepared to sustain losses for a long time. Unless you have cash cows in the group, you cannot do it,'' says a senior executive in Aditya Birla Group who did not want to be identified.

According to retail consultants, high costs including rents dented the profitability of smaller retailers. "The top four or five retailers were paying 7 to 9 percent of their sales as rent but smaller players were paying much more than that. As a result, their losses were higher,'' says Ramesh Srinivas, head, consumer markets advisory services at KPMG.

However, not all is lost for mid-level retailers. Arvind Singhal, chairman of Technopak Advisors said it would be wrong to write them off.  "Even the bigger ones are facing a lot of problems and we can see a lot of examples of mid-level retailers who are doing well,'' says Singhal.  He cites the examples of Croma, The Mobile Store, Trent, Tanishq to justify his argument.
Raghavendra Kamath in Mumbai
Source: 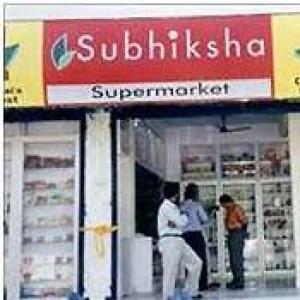 Subhiksha stores to reopen as franchises