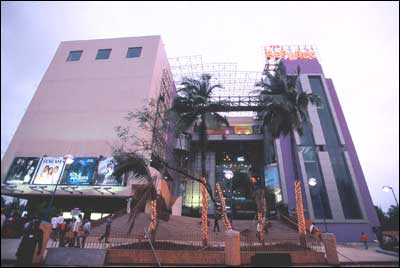 DT Cinemas Ltd, the wholly-owned subsidiary of construction company DLF Universal Ltd, is thinking big and different. It wants to leverage its two-year experience in the film screening business to move into the entertainment sector.

Opening on Friday at Gurgaon's Mega Mall is a cineplex together with a food court. Come November, a family entertainment centre will also be a part of the complex.

"Entertainment is a sunrise industry with huge potential," says Pia Singh, director, DLF. "With our experience of running DT Cinemas we have the expertise to move into similar businesses like running food courts and FECs. The skill-sets for managing these are the same. Our plan is to provide all-round entertainment under one roof."

Most industry watchers regard entertainment and leisure as one of the most exciting sectors. With disposable incomes rising and a growing "young" population, it is estimated that the sector will be worth Rs 5,000 crore (Rs 50 billion) in a few years time. Investments in the FEC segment alone is expected to touch Rs 2,000 crore (Rs 20 billion).

Besides a three-screen cineplex, the entertainment complex will have a food court that will have outlets of Ritu Dalmia, McDonald's, Barista, Subway and Simply South, among others. The entertainment centre will have flight simulators, joy rides, bowling alleys, video games arcade and carousels.

DLF officials are looking at an average of 6,000 footfalls a day with a minimum spend of Rs 250 per head. "Our aim is to capture the mass market and draw in the crowds. Our price points have been decided keeping this in mind," says Singh. Cinema tickets will be around Rs 150 while the average price at the food court will be Rs 60. Prices at the entertainment centre will start at Rs 10 and reach Rs 100.

At an initial investment of Rs 22 crore (Rs 220 million), Singh says that she is looking at a five-year payback period.

DT Cinemas wants to take its concept of a cineplex, food court and an entertainment zone to other cities. Apart from its Gurgaon venture, the company plans to open similar "total entertainment complexes" at Savitri, Saket, Shalimar Bagh and Vasant Kunj (all in Delhi).

It is looking at real estate in cities like Mumbai, Kolkata, Chandigarh, Amritsar and Hyderabad. The company wants to have a total of 70 screens by 2006.