Interest of LIC policyholders will be protected: Anurag Thakur The government will protect the interest of policyholders of LIC, which is likely to go public in the next financial year, Minister of State for Finance Anurag Thakur has said.

Listing of LIC will help bring in greater transparency, public participation and also deepen the equity market, he said.

Asked about quantum of stake sale, he said, once the amendment to the LIC Act is finalised you will get all the details.

"LIC have an independent set-up to decide where they want to invest even today and what will continue in the next format that would come into light as well in the future," he said.

Finance Minister Nirmala Sitharaman while presenting the Budget 2020-21 on Saturday proposed to sell a part of government stake in LIC through an initial public offer next fiscal.

The government aims to garner Rs 90,000 crore from the listing of LIC and stake dilution in IDBI Bank in the next fiscal out of total divestment target of Rs 2.10 lakh crore.

The government currently owns 100 per cent in LIC, while it holds around 46.5 per cent stake in IDBI Bank.

"Just three four months back the government announced corporate tax rate cut. It takes some time to implement that at the grass-root level.

“So, you will see impact of that in some time. That is why we have not said 7.5 per cent, we have said 6.5 per cent (growth). And that is a real and genuine numbers we are looking at," he said.

Besides, he said, the revenue and expenditure target for the next fiscal are very much achievable.

The Budget has pegged total receipts at Rs 22.46 lakh crore and expenditure at Rs 30.42 lakh crore 2020-21 keeping in mind government's commitment towards various schemes and need for improvement in quality of life of the people.

Terming this year's Budget as 'Jan Jan Ka Budget', Thakur said, every strata of the society has been taken well into consideration and major reforms have been undertaken benefiting youth, women, farmers, investors and middle class.

"Doubling farmers' income is an agenda for the next two years. We have already fulfilled the commitment of one and a half times of cost of production of farmers which government had promised," he said.

With the announcement of 'Kisan Rail' and 'Krishi Udaan' to be launched by Indian Railways and Ministry of Civil Aviation, respectively, for a seamless national cold supply chain for perishables, this too will serve beneficial as it will aid farmers in facilitating smooth and fast transport of perishable goods, he said.

In addition, the government has increased agriculture credit target to Rs 15 lakh crore for the next fiscal.

Thakur said, "from the start-ups to education, internship to apprenticeship many announcements have been done...So, I think more young entrepreneurs, more start-ups we are going to see...We see India moving to top three start-up countries in the world in the next couple of years".

With regard to helping the MSME sector, he said, the government has asked the RBI to consider extending debt restructuring window by another year till March 31, 2021.

More than five lakh MSMEs have benefitted from restructuring of debt permitted by the Reserve Bank of India in the last year, he said. 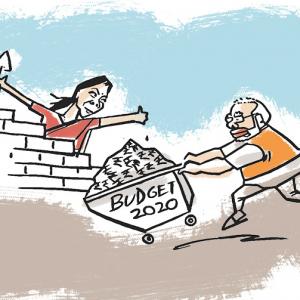