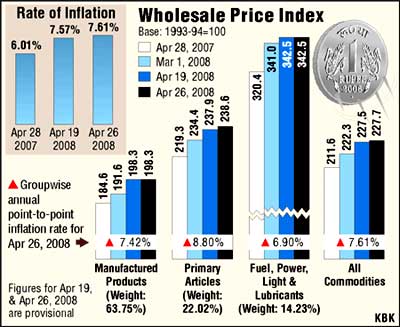 Inflation rose to 42-month high of 7.61 per cent for the week ended April 26 as against 7.57 per cent in the previous week on account of rising food prices and some manufactured products.

The Wholesale Price Index-based inflation stood at 6.01 per cent in the corresponding week a year ago.

During the week, prices of tea jumped by 11 per cent, fruits and vegetables by one per cent, fish marine by two per cent, spices and cardamoms by three per cent.

At the same time, cement, aluminium ingots and other aluminium materials hardened.

However, steel prices declined during the week.