News
Business
Movies
Sports
Cricket
Get Ahead
Money Tips
Shopping
Sign in  |  Create a Rediffmail account
Rediff.com  » Business » Hungry kya? MTR may have something for you

Hungry kya? MTR may have something for you

MTR re-positions its brand to cater early morning to the hungry urban young. It has launched a range of breakfast foods to pave the way for future product and brand transformation. One of India’s oldest home-grown brands, MTR Foods, now owned by a Norwegian giant Orkla, is moving out of its comfort zone.

Having built its image as a company that sold everything from ready-to-eat vegetarian Indian meals to papads, the brand is positioning itself as a healthy option in the convenience foods market.

MTR has just launched a range of breakfast foods, which it says will pave the way for future product and brand transformation. It has also revamped its packaging and distribution network and is getting out of low-margin categories while adopting a more vibrant visual identity. 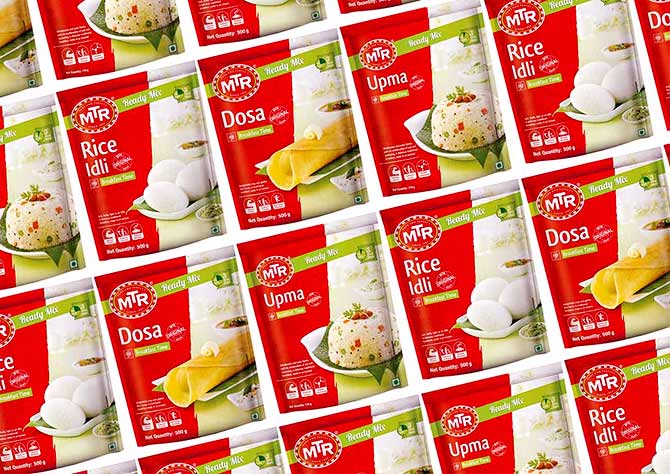 The company has set aside around Rs 40 crores for the promotion of its breakfast range, with nearly 30 per cent going into digital initiatives. With this, MTR hopes to find greater relevance with the urban young, a set of consumers that are global in their tastes and are focused on health, ease-of-use and convenience in the kitchen.

The Indian breakfast category that MTR is targeting, is highly fragmented. It also has almost every big brand -- global and local -- vying for a slice. Kellogg's, Quaker, Saffola and Bagrry’s are the big players and they cater to the premium consumer in the non-Indian breakfast segment.

With the MTR 3 Minute Breakfast, the company hopes to challenge their dominion.

According to market estimates, the Western packaged breakfast category is around Rs 1,000 crores while the Indian breakfast segment is around Rs 250 crores. 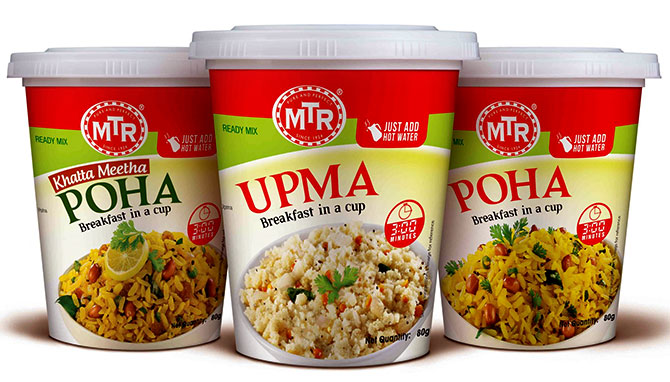 The wall between the two is increasingly coming down as even non-Indian packaged breakfast products are being reformulated with an Indian twist. All big brands have launched variants of their flagship labels to cater to the local palate.

MTR’s Centre of Excellence at Bengaluru was tasked with bringing down the time taken for a meal to make its way from the box to the customer’s plate. Bhasin says that the chefs came up with an 8-minute option. But he asked for the time to be cut down to 3 minutes and that is how the new range came into being.

While convenience is a big factor, will this be enough to counter the heavy marketing firepower of the national and global brands in the category?

The company is banking on the marketing muscle that its Norwegian owner Orkla ASA (it was acquired for around $100 million in 2007 from founder-promoters, the Maiya family) brings to the market. It is also hoping to leverage its understanding of the Indian customer that it has gathered through its long association with the processed foods and restaurant businesses in the country.

MTR traces its history to the 1920s when the Maiya family opened the first MTR restaurant in Bengaluru. Sadanand Maiya, son of MTR’s founder, broke away to launch MTR Foods in 1994. Under Orkla, the brand has been working to transform itself from a regional to a national player. The first transformation was in 2010-11, which led to a revamped product portfolio and retail strategy. The second phase, since 2016, has meant changing the look and feel of the brand.

Convenience foods are the staple of urban couples, the young with busy lifestyles as well as seniors living alone. The coming decade is going to be important for the category and MTR is particularly focused on the young because “this generation does not know much about cooking, they depend a lot on packaged food,” says Bhasin.

MTR calls itself a multi-category foods brand today, catering to every meal, from breakfast to dinner. It has dropped out of categories such as ice creams and papads, which are not central to the meal Bhasin explains. Instead the company has come up with desserts and snacks.

Bhasin believes MTR can achieve its target of Rs 2,000 crores revenue by 2020. The breakfast category, which currently contributes around 10 to 12 per cent, will contribute more, he says. The marketing team is working to build awareness about the brand through a multi-media advertising offensive.

The campaign is focused on portraying the brand as one that offers pure and authentic tastes out of a box. The online marketing strategy involves putting out recipe and cooking videos along with brand promotions and is spread over multiple social media platforms. Earlier in May, MTR also rolled out an e-commerce platform and its products are already available on grocery e-tailing platforms such as Big Basket and Grofers.

MTR says its brand overhaul is backed up by a strong distribution network and retail strategy. The company retails out of over six lakh outlets currently and is extensively expanding its footprint.

“And last but not the least MTR has a 100-year old legacy. We are known as people who know foods,” says Bhasin.