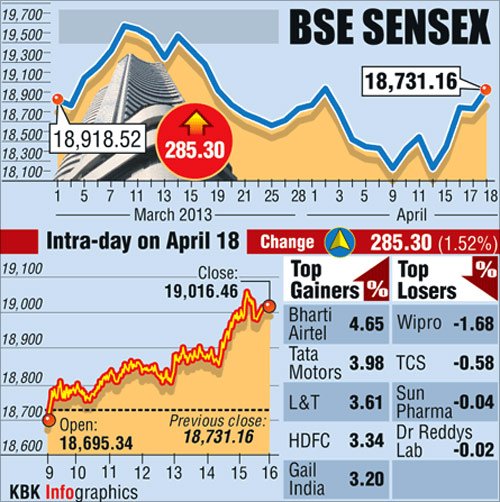 Investor’s risk-appetite was firm after prices of global commodities such as brent crude and gold slipped further, that will help bride the burgeoning current account deficit.

If this declining trend in commodity prices holds, CAD could come down to around three per cent in 2013-14 due to the lower import bill, said analysts.

Exports in March stood at $30.8 billion compared to $28.8 billion in the same month of previous year.

Rate-sensitive sectors such as banks, real-estate gained amid hopes that the central bank would ease monetary policy more aggressively next month to boost growth into the Asia’s third-biggest economy.

Apple Inc shares tumbled on worries about weakening demand for the iPhone and iPad.

home, the key sectoral indices such as consumer durables, autos, banks, capital goods, PSU gained while IT sector declined on the BSE.

The key notable movers are, Wipro which dropped by 1.6% ahead of its January-March quarter (Q4) earnings due on April 19. 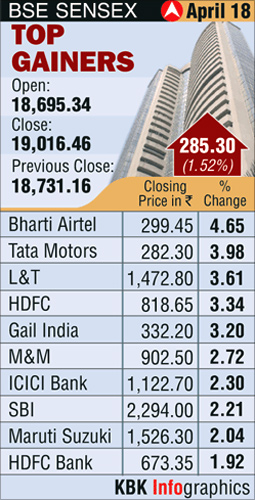 Shares of metal companies are trading lower by up to 3% in noon deals after the Supreme Court (SC) today cancelled all the mining leases for extraction of iron ore in 49 category C mines in Bellary, Tumkur and Chitradurga districts of Karnataka.

Among the individual stocks,NMDC is the largest loser, down 2.5% at Rs 123.75 on BSE. JSW Steel, Steel Authority of India, Jindal Steel and Power, Sterlite Industries and Tata Steel ended lower by 1- 2%.

The private sector bank had profit of Rs 223 crore in a year ago quarter.

Gayatri Projects soared 11% to Rs 75.80 after the company said its arm has executed power purchase agreement (PPA) with Andhra Pradesh government for its 1,320 MW power plant in the state.

The country’s top tyre-maker had a profit of Rs 150 crore in the same quarter last year.

The broader markets gained with mid-caps and small-caps adding 0.6-0.7% on BSE. 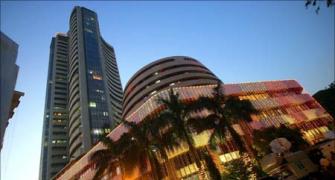 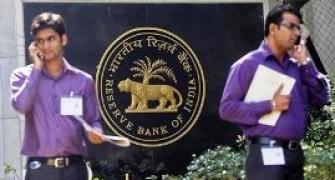 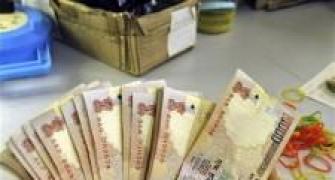 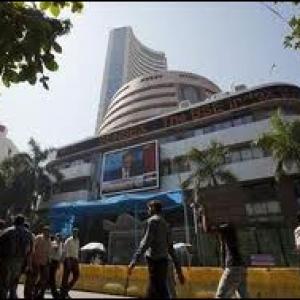 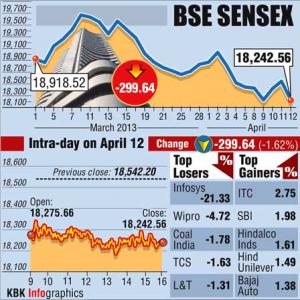