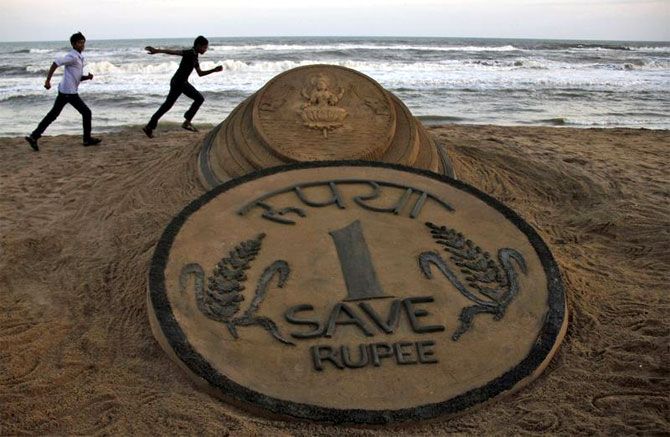 Extending losses for the second straight day against the American currency, the rupee dipped by 30 paise to fresh 28-month low at 67.59 on fresh dollar demand from importers in view of persistent foreign capital outflows amidst sharp fall in equities.

Persistent fall in crude oil prices also affected the market sentiment. Oil prices eased in Asia today, with the under-pressure commodity sitting around 12-year lows as dealers prepare for the return of Iranian exports to the market while the US stockpiles increase.

However, the dollar index was down 0.12 per cent against a basket of six currencies in late afternoon trade.

The dollar fell around 0.8 per cent against the yen today in the late Asian market as a resumed global market sell-off sent investors running for cover in the perceived safety of the Japanese currency.

Weakness for the greenback came amid heavy fresh losses for crude oil, which dropped below $30 a barrel in morning European trading hours.

The US stock futures hinted of triple-digit losses for the Dow industrials at the open of trade later.

Foreign portfolio investors pumped out $171.71 millions from equity market yesterday as per the SEBI's record.

In forward market, premium for dollar firmed up on fresh paying pressure from corporate.

The domestic currency continued to decline against the Japanese yen to settle at 57.58 from 57.24 per 100 yen yesterday.

Source: PTI© Copyright 2023 PTI. All rights reserved. Republication or redistribution of PTI content, including by framing or similar means, is expressly prohibited without the prior written consent.
Related News: US, BSE
Print this article