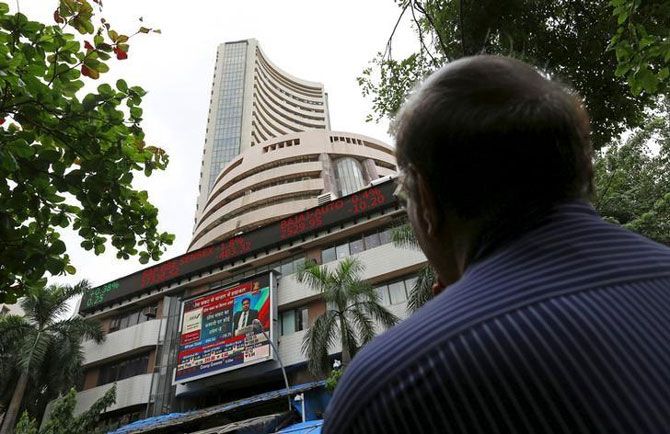 Markets consolidated for most part of the trading session to end marginally lower with financials leading the decline along with FMCG majors.

"Yesterday's rally was more of a pullback with strong short covering led by financials. Investors are seen booking profits at higher levels while stock specific action is seen post the earnings announcement. Power-related stocks were among the most active," said A K Prabhakar, Head of Research at IDBI Capital.

On Tuesday, the benchmark indices registered their highest intra-day gain in five months led by financials. The Sensex surged 521 points and the Nifty jumped 158 points to register their biggest intra-day gain since May 25, 2016.

Foreign institutional investors were net buyers in equities worth Rs 345 crore on Tuesday, as per provisional stock exchange data.

The GST Council on Tuesday discussed a four-tier rate structure suggested by the Centre and agreed on compensation to loss-incurring states for the first five years of the new tax regime. The Opposition might voice differences with the proposal.

The council was apprised of the proposal of these slabs - 6, 12, 18 and 26 per cent, with cess on the highest tariff for ultra luxury and demerit items.

The proposal also includes four-per cent rate on gold, but the Centre said it can’t be called a slab because it is specific to just one commodity.

FMCG majors were the top losers with ITC down 2.6% on fears that higher GST rate on select products would result hikes in product prices and hurt volume growth going forward. Hindustan Unilever ended down 1.2%.

Financials witnessed profit taking with ICICI Bank closing 2% lower after gains of 11% in the previous two sessions after the Essar group on Saturday signed a binding agreement with Russia’s Rosneft, United Capital Partners and Trafigura Group Pte. to sell 98% in its most priced asset, the 20 million tonnes per annum Vadinar refinery and Vadinar port in Gujarat. The private banker is a lender to the Essar Group.

Other Sensex losers include HDFC, TCS and Asian Paints which ended over 0.6% lower.

Auto shares retreated after recent gains with Hero MotoCorp down over 1% followed by Tata Motors, M&M and Maruti Suzuki.

Index heavyweight Reliance Industries witnessed renewed buying interest to end up 0.5% ahead of its second quarter earnings on Thursday.

State-owned engineerging major BHEL was the top Sensex to gain 3.5% on reports that a foreign brokerage upgraded the stock.

Endurance Technologies surged 30% to end at Rs 614. Earlier, the stock listed at Rs 572 on the National Stock Exchange (NSE), a 21% premium against its issue price of Rs 472 per share.

ABG Shipyard has moved higher by 17% to Rs 39.25 on BSE on the back of heavy volumes after the company said it is exploring the possibility for strategic investors so as to improve the company’s financial and operational strength.

Garden Silk Mills zoomed 19% after the company said that a meeting of the Board of Directors of the Company will be held on October 25, 2016, to consider the proposal for raising of funds aggregating to Rs. 30 crores by issue of convertible share warrants / convertible securities in favour of promoter / promoter group of the Company.

Sterling Tools has surged nearly 15% to Rs 1,008, also its record high on BSE in intra-day trade, after its board said it will meet on November 5, to consider stock split of equity shares.

Havells India ended down 5% after the company reported a net profit of Rs 146 crore, against an average analyst’s estimate of Rs 157 crore, for the quarter ended September 30, 2016 (Q2FY17). The company had profit of Rs 120 crore in the same quarter year ago.