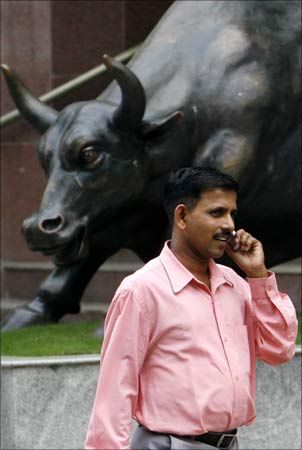 The rally on the bourses was further supported after a foreign brokerage upgraded the Indian equity market to 'overweight' from 'equalweight'.

In the broader market, both the BSE Midcap and Smallcap indices rose 1%, underperforming the front-liners.

Besides, volatility will be seen tomorrow on the bourses as traders will roll over positions in the futures & options segment from the near-month May series to June series.

Nikhil Kamath, Co-Founder & Director, Zerodha says, “We are seeing significant call buildup on the 8000 strike and this could act as a resistance going into expiry tomorrow.

"A confirmation of this uptrend can be perceived by a close above the 8050 levels, we would still recommend allocating capital to fixed income and gold at this juncture."

Among global peers, Asian shares jumped on Wednesday while the dollar firmed as upbeat US home sales supported the view that the economy may be strong enough for the Federal Reserve to raise interest rates in coming months.

Oil futures pushed closer to $50 a barrel on Wednesday, with US crude hitting its highest in over seven months after industry data suggested a larger-than-expected drawdown in US crude inventories last week.

Back home, private weather forecaster Skymet has predicted an above normal monsoon in India, starting in July.

On Tuesday it announced that the monsoon will be 109% of the long-period average, for the four-month period from June to September.

It also said the monsoon would arrive on time in Kerala, though the Indian Meteorological Department predicted it would arrive late on June 7.

Reversing its nine-day losing trend, the rupee today recovered 20 paise to 67.55 against the US dollar on fresh selling of the American currency by exporters and banks amid strong equities. 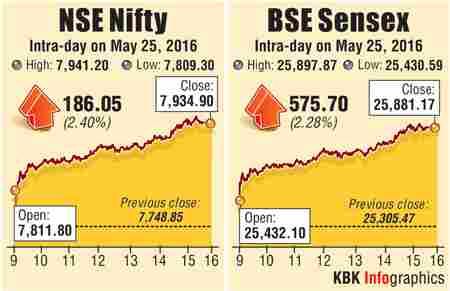 Bajaj Auto moved higher by 5% to Rs 2,505 on the BSE after the company reported 29% year on year (YoY) jump with net profit at Rs 803 crore for the quarter ended March 2016 (Q4FY16), on the back of strong operational performance.

Banking shares were in focus with the Nifty Bank and Nifty PSU Bank indices up nearly 3% each on the National Stock Exchange (NSE).

State Bank of India (SBI), ICICI Bank, Canara Bank, IndusInd Bank, Indian Overseas Bank, Oriental Bank of Commerce, Andhra Bank and Bank of India were up 3%-6% after the private forecasting agency Skymet on Tuesday raised India's monsoon forecast to 109% of the long period average from 105% on the back of a waning El Nino.

According Reuters report, Vinod Rai, the veteran bureaucrat appointed this year to run the new Banks Board Bureau, told news agency the government stood ready to inject fresh funds beyond the $3.7 billion earmarked in the 2016/17 budget.

Axis Bank’s top management has decided to take home a reduced variable pay, as the lender’s performance came under pressure in the last financial year due to mounting bad loans. The stock surged around 3%.

Maruti Suzuki India plans to use 40% of its proposed capex of Rs 4,400 crore for the current financial year for new product development.

However, Cipla was the only stock from Sensex-30 that ended lower and hit 52-week low in intraday deals.

The stock dipped 5% after reporting a sharp 69% year-on-year drop in net profit to Rs 81 crore in the quarter ended March 2016 (Q4FY16), on account of one-off expenses related to inventory reduction and closure of business in some small-sized foreign markets.

Indoco Remedies moved higher by over 11% after the pharmaceutical company announced that it has received US regulator nod for its manufacturing facility in Goa. 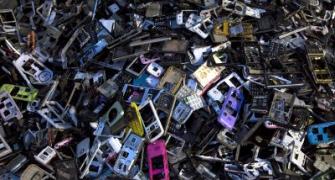 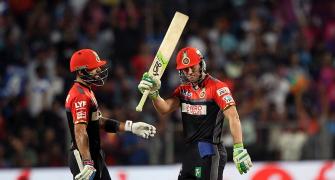 Kohli declares AB the 'best in the world' 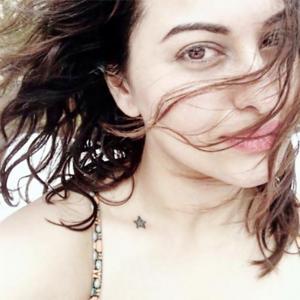 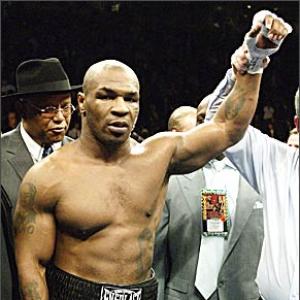 Mike Tyson lashes out at AIBA. Here is why...