In the broader markets, BSE Midcap ended up 0.3% while the Smallcap index ended . Market breadth ended positive with 1217 gainers and 976 losers on the BSE.

"Market remained extremely volatile before the Nifty closed at 8549.50 with a gain of 29 points.

Overall we expect a short term correction if Nifty moves below 8480 level.Going forward market movement will depend on FII and DII trading activity, quarterly results of the major companies and price movement of crude in international market.

The volatility in rupee against dollar and prospect of important bill in parliamentary session is also like to add volatility," says Rohit Gadia, Founder & CEO, CapitalVia Global Research Ltd.

Foreign institutional investors were net buyers in equities worth Rs 599 crore on Monday, as per provisional stock exchange data.

IT majors TCS and Infosys which faced selling pressure in the previous sessions post their first quarter earnings recovered on renewed buying interest at lower levels.

Among the index heavyweights Reliance Industries ended up over 1% after the company's first quarter earnings beat street on higher gross refining margins.

ICICI Bank emerged as the top Sensex gainer to end over 2% higher on renewed buying interest amid attractive valuations.

The company reported an increase of 9.79% in standalone net profit to Rs 1,173.90 crore for the first quarter ended June 30.

For the second straight quarter, HUL reported only a four per cent volume growth, lower than the six-seven per cent band it had seen in previous periods.

Two-wheeler majors retreated after gains in the previous sessions. Bajaj Auto and Hero MotoCorp ended down 0.2%-0.8% each.

The steel major said it will seek shareholder approval at an annual general meeting on 12 August 2016, to issue non-convertible debentures on private placement basis worth Rs 10000 crore. The announcement was made after market hours yesterday.

The auto major's UK subsidiary Jaguar Land Rover recently reported 22% jump in global retail sales to a record 2,91,556 units in the first half this year riding on robust demand in Europe and the UK. 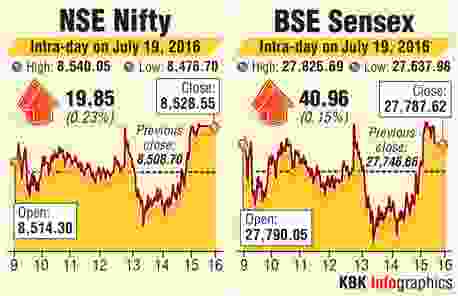 In the mid-cap segment, JSW Energy closed 1.6% higher after the Sajjan Jindal-promoted company acquired the 500-megawatt power plant of debt-laden Jaiprakash Power Ventures at Bina in Madhya Pradesh for Rs 2,700 crore, 10 months after the two firms got into a binding agreement.

JP Associates ended up over 6% while JP Power Ventures surged over 5%.

Piramal Enterprises ended up over 3% after the company said its board will meet on July 21, 2016 to consider and approve the issue of secured non-convertible debentures amounting upto Rs. 1,000 crores on private placement basis.

Among others, select state-owned banks were in action after the government on Tuesday said it is releasing Rs 22,915 crore to recapitalise 13 public sector banks. SBI ended flat while Canara Bank gained nearly 6%.

Mindtree slumped over 8% after the IT firm posted a 3.7% drop in consolidated net profit at Rs 123.5 crore in the first quarter of the ongoing fiscal.

Exide Industries ended down nearly 2% on profit booking after the company reported 24.5% year-on-year (YoY) jump in net profit at Rs 193 crore for the quarter ended June 30, 2016 (Q1FY17), on back of double digit growth in operational income.

The stock had gained over 10% in the past one month ahead of its earnings annoucement.

Manpasand Beverages surged 5% to end at Rs 698 appreciating more than 100% against its initial public offer (IPO) issue price of Rs 320 per share.