Further, trade deficit for the month of December decreased by 44% at $9.43 billion hitting a ten month low mainly on account of falling imports due to slump in crude prices.

BSE Consumer Durables index was the top sectoral gainer up 2% followed by Capital Goods, Power, Healthcare and Realty among others.

Consumer goods stocks gained as easing inflation would increase the purchasing power of consumers while consumer loans would become cheaper on the back of lower interest rates. Blue Star, Symphony, Titan and PC Jeweller ended up 2.5-4% each.

TCS ended down 0.5% after the IT major failed to deliver any surprise in its quarterly results. The company's volume growth remained flattish at 0.4 per cent, compared with Infosys' 4.2 per cent. Infosys ended down 0.8% while Wipro also ended down 0.8% ahead of its third quarter earnings today.

Reliance Industries ended up 0.5% ahead of its third quarter earnings due for release later today.

HDFC Bank has extended gains from yesterday and ended up 1%. Axis Bank end flat with positive bias. Axis Bank today reported a Q3 net profit of Rs 1,900 crore compared to Rs 1,604 crore in the year-ago period, an uptick of 18.5%.

Among the defensives, pharma shares witnessed renewed buying interest with Cipla, Dr Reddy's Labs and Sun Pharma up 1.5-2.9% each.

Hindustan Unilever which was the sole loser on Thursday ended 1% higher.

BHEL gained 2% after the company on Thursday announced it has bagged a contract from the Karnataka Power Corporation Limited (KPCL) for setting up a Combined Cycle Power Plant (CCPP), valued at Rs 1,202 crore.

Bharti Airtel which has exposure to swiss bonds ended down nearly 2% after the Swiss National Bank scrapped its cap on the franc in a sudden move, pushing the Swiss currency up sharply.

GAIL ended down 0.8%. A major fire broke out at GAIL's natural gas pipeline in South Delhi's Satyaniketan area after it was perforated by civic construction contractors but there were no casualties reported.

Among other shares, SpiceJet ended locked in upper circuit of 10% after Kalanithi Maran and his associates had decided to transfer the ownership and management control of the airline to former promoter Ajay Singh and a clutch of investors. Sun TV Network ended up

In the broader market, the BSE Mid-cap gained 0.3% and Small-cap ended marginally down.

Market breadth was marginally higher with 1,375 gainers and 1,546 losers on the BSE. 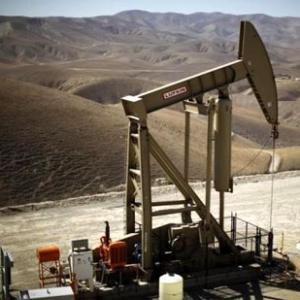