Markets ended the first trading day of the truncated week on a firm note amid fresh buying interest as investors heaved a sigh of relief after the uncertainty over the US Federal Reserve interest rate hike got over last week.

A stellar rally was seen across the metal stocks after the government decided to slate a minimum import price for steel in order to prevent cheap imported steel from flooding the market.

Meanwhile, Brent crude prices slipped to its lowest level since 2004 on supply glut as oil producing countries from the Middle East to Russia and Iran flood the world with increased supplies.

Further, uncertainty over the GST Bill continues following the stand off between the government and the Congress. The winter session of the parliament ends on Wednesday, December 23.

BSE Metal index emerged as the top gainer up 1.6% followed by Bankex, Realty, FMCG and Power indices up between 1%-1.5%. Healthcare and Consumer Durables indices were the biggest losers down 0.5%.

A stellar rally was seen across the metal stocks after the government decided to slate a minimum import price for steel in order to prevent cheap imported steel from flooding the market.

Meanwhile, Adani Ports and Special Economic Zone and Asian Paints have replaced Vedanta and Hindalco Industries from the 30-share S&P BSE Sensex with effect from today.

Meanwhile, banking stocks finished higher on the back of higher volumes as the government is set to introduce the Insolvency and Bankruptcy Code 2015 in Parliament on Monday and looks forward to push its reform agenda. 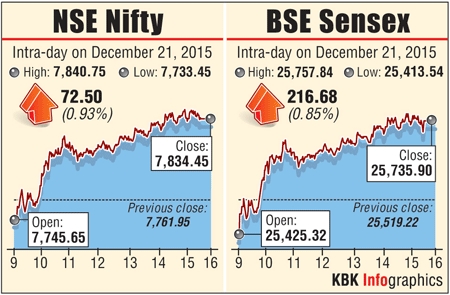 Another prominent gainer in today’s trade was Cipla up 0.5% after it announced the launch of generic version of anti hepatitis drug Ledipasvir-Sofosbuvir in the domestic market.

The drug is used for treating hepatitis C virus.

About 12-18 million Indians are suffering from the disease while globally the number of patients is about 185 million.

Among other gainers include ONGC, ITC, M&M, Infosys and Hero Motocorp up between 1.5%-3%.

On the flip side, selling pressure continued in Sun Pharma after the company said it has received a warning letter from the United States Food and Drug Administration post the September 2014 inspection of its facility located at Halol in Gujarat.

The US and UK are scheduled to announce their Q3 GDP data is on Tuesday each. Meanwhile, US initial jobless claims data for December is scheduled to be release on Thursday.

Image: A man walks past the Bull at the Bombay Stock Exchange. Photograph: Sahil Salvi

Get Rediff News delivered into your Inbox.
Indrani Mazumdar in Mumbai
Source: 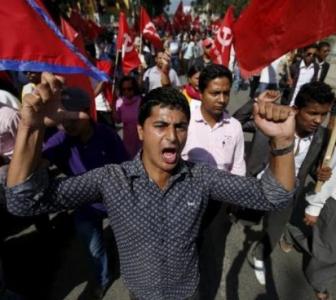 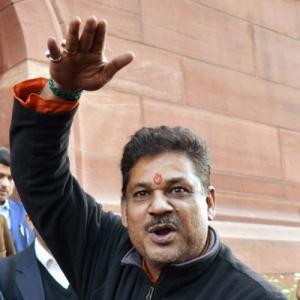 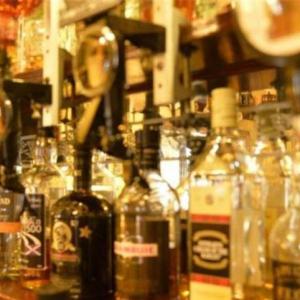