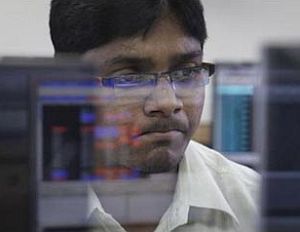 Benchmark indices ended marginally higher, after a volatile day of trade, aided by gains in the shares of SBI, Tata Motors and ONGC.

Sentiments were also lifted by a sharp recovery in the Chinese markets which saw Shaghai Composite index closing higher by around 3%.

Benchmark indices are swinging between the positive and negative territory in the late noon trades in the absence of any fresh directional cues. However, investors are likely to remain cautious ahead of the release of inflation and industrial production data due on Friday.

The broader markets are outperforming the benchmark indices- BSE Midcap and Smallcap indices have gained between 0.8-1%. The market breadth on the BSE remains healthy 1,587 shares advancing and 1,176 shares declining.

Sustained decline in global crude prices and weakness in US markets pulled down Japanese shares. Nikkei has lost over 2%.

Despite concerns about Chinese economic growth Chinese shares. Hang Seng and Shanghai indices gained 0.2% and 3% each.

Meanwhile, China's annual consumer inflation eased to a five-year low of 1.4% in November from 1.6% in October, the lowest since November 2009, signalling persistent weakness in the world's second-largest economy and giving policymakers more room to ease policy to support growth.

However, Shares plummet and confidence is shattered after Greek PM calls a snap presidential election that could lead to the radical Syriza party taking power.

On the sectoral front, BSE Consumer Durables index is the top gainer up 1.5% followed by BSE Bankex and Power indices up 1% each.

On Tuesday, finance minister, Arun Jaitley informed the parliament that the government has finalized plans to sell a part of its stake in Coal India, ONGC and NHPC under its disinvestment programme for the current fiscal year. ONGC Videsh has won an Exploration Block- 14TAR-R1 in New Zealand.

The Indian government owned company had submitted bid for the block located in the Taranaki offshore basin in October 2014 under a bidding round launched by the New Zealand government.

The government could soon finalise the proposal for coal linkage rationalisation and swapping arrangements of about 40 thermal power projects, a move that is expected to save up to Rs 6,000 crore in logistics cost.

The proposal includes swapping agreements for power projects of companies including Adani Power, Indiabulls Power and NTPC, among others.

Tata Power signs an agreement for acquisition of 540 MW coal based thermal power project in Maharashtra Tata Power is up 2.6% and NTPC has gained 0.5%. Among the metal gainers, Sesa Sterlite up nearly 1.5% and Hindalco is up 0.8%.

Shares of public sector undertaking (PSU) banks are in demand and trading higher by up to 4% on the National Stock Exchange (NSE), outperforming the benchmark indices that have gained less than 1%.

Among individual stocks, Allahabad Bank, Oriental Bank of Commerce, Canara Bank, Indian Overseas Bank and Andhra Bank are up more than 3% each.

Shares of Cipla are up nearly 2% at after the company said its Mauritius-based firm plans to divest its entire stake in China-based pharmaceutical company.

Dr Reddy’s Lab is up 0.6%. Auto shares are trading mixed. Hero Motocorp has gained over 1.4%. According to news reports, the company is tying up with Snapdeal to sell motorcycles on the online platform. Tata Motors was up 0.8% while Maruti Suzuki, Tata Motors are trading higher by over 1%. Reliance Industries is down 0.4%.

The stock had gained in early trades on reports that the Telecom Disputes Settlement and Appellate Tribunal (TDSAT) has set aside a penalty of Rs 650 crore imposed on the company by Department of Telecommunication (DOT) in a roaming case. GAIL is down 1.6%.

UP Government has agreed to constitute high power committee for GAIL’s Jagdishpur - Haldia pipeline. BHEL is down 2%.

According to media reports, the company would set up an integrated solar photo-voltaic manufacturing facility of around 500 MW per annum in Maharashtra. L&T is down 0.7%.

FMCG stocks are reeling under pressure in today’s trade. ITC and HUL are down between 0.8-1%.