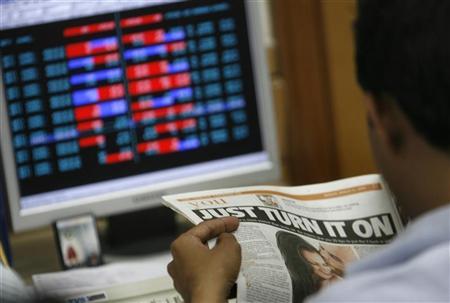 Markets opened higher and remained rangebound during the first half of the trading session only to fall sharply in late noon trades spooked by a weak monsoon forecast.

However, a sharp rebound in late trades led by financials lifted the Nifty above the 8,400 mark.

In the broader market, both the BSE Midcap index, up 0.4% and Smallcap index, ending flat underperformed the front-liners.

Market breadth in BSE ended positive with 1,374 advances against 1,368 declines.

The first forecast of Monsoon rains, released today by Indian Meteorological Department (IMD), predicted that the rainfall during the season may fall below normal adding to the worries over the possible build-up of an El Nino condition in South Asian region threatening severe to moderate disruption of rains.

On the political front, proceedings of the Parliament will be keenly watched as the government gears up to pass the Constitution Amendment Bill for the levy of Goods and Services Tax (GST) in the country which promises to integrate state economies and boost national growth.

The bill was introduced in Lok Sabha in December.

Six out of the 12 sectoral indices of BSE ended in green. BSE IT Capital Goods index, up 1.8% was the top gainer followed by BSE Healthcare index, up 1.2% and BSE Bankex, up 0.8%.

BHEL gained around 2%. Shares of IT companies closed weak for the sixth straight session on discouraging earnings reports posted by most of the IT majors for the quarter ended March 2015.

Wipro, the largest loser from IT pack, dipped nearly 6%, after the company said its IT Services revenue in dollar terms declined by 1.2% at $1.774.50 million for the quarter ended March 2015 (Q4FY16), on sequential basis.

Wipro has appointed Rishad Premji, son of founder Azim Premji to the company's board. Infosys and TCS have lost 1.6% and 0.2% each.

Sesa Sterlite has changed its name to Vedanta Limited post securing all the requisite approvals from shareholders and regulatory authorities.

The stock ended down 0.2%. The government has confirmed the appointment of Dinesh K Sarraf as the chairman and managing director of India's biggest oil and gas producer, ONGC.

The stock ended down nearly 3%. ITC ended higher by 0.3% on media reports that it is in talks with Century Textile and Industries Ltd to buy its paper division in a bid to diversify revenue to non-tobacco businesses.

The Reserve Bank of India has prohibited further FII purchases in the Kotak Mahindra Bank's shares, as aggregate foreign shareholding in the bank has reached the threshold limit after the acquisition of ING Vysya Bank.

Recovering from the thrashing it witnessed yesterday, Sun Pharma ended higher by 2% after foreign investors bought shares of the drug maker via open market on Tuesday. M&M opened its extended automobile manufacturing facility at Zaheerabad in Telangana on Wednesday. The stock ended up 2%.