Hedgeloop, Accuracap and other entities are pioneering a growing market and attracting much interest from businesses by using software to make informed decisions in this area Vishnu Bodapati decided there wasn’t enough informed guidance in the market to help him decide on the best investment areas.

So, he brought a senior scientist, an economist, and a mathematician together, to help build an artificial intelligence (AI) model that would learn to make informed decisions for them.

Hyderabad-based Hedgeloop, which he established in 2015, is discussed in hushed tones across investment circles.

For, their high-end and deep learning-driven software is helping brokers make better decisions.

“It’s important for companies delving in fintech to have a very good understanding of customer analytics, as well as a fantastic algorithm and AI, to make a mark,” says Vidhya Shankar, executive director at Grant Thornton India, while discussing upcoming financial technology start-ups in the country.

Trading in hedge funds does depend to a great extent on data analysts being able to build complex models to help decision making. And, for the models to be regularly updated, as market conditions keep changing. Hence the dependence on hedge fund managers.

“There is a huge interaction chain from client to hedge fund manager who act on their best knowledge.

We built a system that understands these factors that go into decision making and automated it completely.

We fed over 8,000 factors affecting global markets into a deep learning system that can work 24x7,” says Bodapatti.

He views his work as democratising of hedge funds, making it simpler and easier for people who are not from a market background to invest.

Similar start-ups in this area include Hong Kong-based Aidyia and US-based Sentient and Binatix, while several established financial institutions are attempting to enter the space.

Hedgeloop claims an algorithm that uses real-time data, predictive modelling based on statistics, sentiment analysis and economic data, along with risk diversification based on individual needs, to create an offer brokers can’t refuse.

Subscription plans are on an annual basis, starting from roughly Rs 100 per investment advice.

Most of Hedgeloop’s initial customers were Bodapati’s former Citibank colleagues.

The start-up let word-of-mouth publicity take them to clients and now they reach around 50,000 brokers, who further take the AI services to their own client base of thousands of users.

The company has been attracting interest from established brokerages for exclusive access to their services, especially from North America.

“We started off on a completely B2C (business to consumer) platform but as we get more interest from businesses, we are working on partnerships there,” he added.

The company manages around Rs 12,000 crore in corpus, with over 400 investors.

The co-founders traded their roles at Adobe’s top tier to “invent” algorithms that would simplify the decision-making process for hedge fund investors. 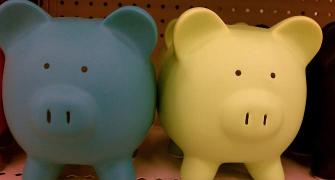