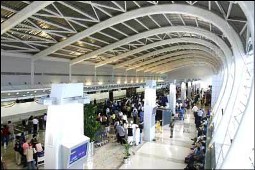 The government on Tuesday deferred the implementation of the ground handling policy at airports by a year, allowing private airlines to continue their ground handling services, along with airport operators, Air India and other air carriers, inside the airport terminal during that period.

The government also changed the existing ground handling policy by deciding to allow private airlines to provide ground handling services inside the airport terminal even after the policy is implemented from next year.

The airlines will use this one-year period to clear the equipment and manpower used by them for the purpose.

The decision was taken at a meeting of the Cabinet Committee on Security headed by cabinet secretary KM Chandrasekhar on Tuesday.

The implementation of the policy had earlier been deferred twice -- from January 1 to July 1, and then to January 1, 2010.

Ground handling activities range from passenger check-ins, baggage and cargo handling at the terminal side to cleaning and refuelling of air planes.

The airlines have always raised concerns on outsourcing the ground handling in the ramp side, which required passenger interface like check-ins, as this directly impacted service standards and were part of the product offered by them. But ground handling in the other sections, that is the runway side, and cargo handling will have only three ground handlers, according to the policy.

Sources said that the ministry wanted the policy to be deferred by two years so that the slowdown-hit airlines were not stressed further.

The ground handling policy, announced in 2007, aimed at bringing down the number of ground handlers at six major airports in the country to three.

According to the policy, the groundhandlers to be allowed to operate at Delhi, Mumbai, Bangalore, Hyderabad, Kolkata and Chennai airports are Air India-Singapore Airport Terminal Services, the airport operator (private operator in Delhi, Mumbai, Bangalore and Hyderabad and the Airports Authority of India in case of Kolkata and Chennai) and the third to be selected by competitive bidding.

In a new year bonanza, the government today cleared a proposal for a wage hike for the faculty members of premier medical institues like All India Institute of Medical Sciences and PGI Chandigarh bringing them at par with their counterparts in Indian Institutes of Technology and Indian Institutes of Management.

The new pay-scale will be implemented with retrospective effect from January 1, 2006 while the allowance will be paid effective from September 1, 2008, they said.