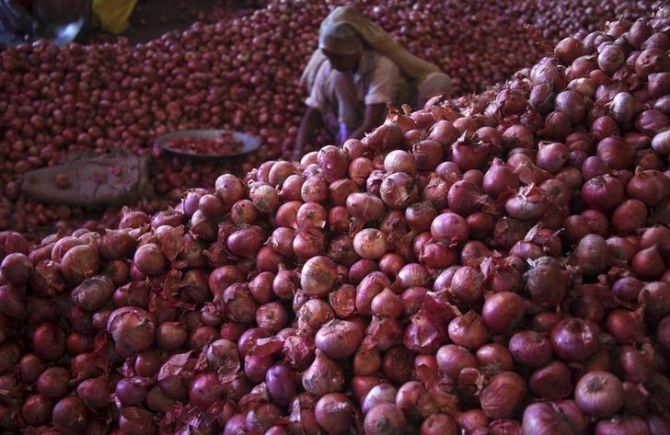 Concerned over rising onion prices, the Centre on Sunday banned the export of the key kitchen staple and imposed a stock limit on traders to improve the domestic availability of the commodity and provide a relief to consumers.

Retailers can stock onion only up to 100 quintals and wholesale traders are allowed to keep up to 500 quintals, the Consumer Affairs Ministry said adding that the state governments have been directed to take stringent steps to prevent hoarding.

The reported export below minimum export price (MEP) to Bangladesh and Sri Lanka will be stopped immediately and strict action will be taken against violators, it added.

The move comes amid sharp increase in retail prices of onion since August despite the government's several measures to boost the supply and contain prise rise.

Currently, retail onion prices are ruling at around Rs 60-80 per kg in the national capital and some other parts of the country due to supply disruption from flood-affected growing states like Maharasthra and Karnataka.

"In view of sustained high price of onion in the market, the central government today took several steps to contain its prices, namely imposition of stock limit on traders, ban on exports, and sate governments will take strict measures to prevent hoarding," the Consumer Affairs Ministry said in a statement.

The government has banned export of onion with immediate effect till further orders for improving the domestic availability, it said.

"Export of all varieties of onions...is prohibited with immediate effect," the Directorate General of Foreign Trade (DGFT), an arm of the commerce ministry which deals with exports and import related issues, said in a notification.

The DGFT on September 13 had imposed a minimum export price (MEP) of $ 850 per tonne to curb its shipments and help bring down rising domestic prices.

The MEP is the rate below which no exports are allowed.

"Though there was some reduction in export of onions thereafter, yet exports were still continuing. The ban on export of onions is expected to improve domestic availability and cool prices," the ministry said.

The government also imposed stock limit on onion traders to facilitate release of stocks in the market and prevent hoarding.

Although the state governments had been authorised to impose stock limit, but this time the Centre has imposed stock limits directly upon the states across the country.

"The stock limit of 100 quintals on retail traders and 500 quintals on wholesale traders has been imposed across the country today," the notification said.

The Centre has directed state governments to enforce stock limits strictly and carry out anti-hoarding operations against the unscrupulous traders by organising raids.

Meanwhile, to give relief to consumers from high prices, the central government is offloading 50,000 tonnes of buffer stock of onion across the country.

State-run Mother Dairy and cooperatives Nafed and NCCF are selling buffer stock onion at a cheaper rate of Rs 23.90 per kg in Delhi.

Other states have also been asked to boost the supply using the central buffer stock.

The Centre last month had also warned of strict action against hoarding of onion amid supply disruption due to floods in parts of major growing states -- Maharashtra and Karnataka.