How to read a stock ticker

Ticker symbols offer quite a bit of information to savvy investors who know what to look for when they see a ticker. In addition to identifying a company, a ticker may indicate the exchange on which a company is traded, whether that company is delinquent in terms of its Securities and Exchange Commission filings, or if a company is currently undergoing bankruptcy proceedings. With so much information available in just a few characters, it's imperative that investors learn the basics of stock ticker symbols. Here we translate ticker talk into plain English.

What is a ticker?
First and foremost, the word "ticker" refers to a series of letters or numbers identifying a particular security on a particular exchange. Stock tickers are the most familiar types of ticker symbols, though options, futures contracts and other types of securities also have ticker symbols.

A few examples of stock tickers include:

How many characters a company's ticker has, and whether its ticker consists of numbers, letters or other symbols depends on the exchange where that company's stock is traded.

The origin of 'ticker'If you are wondering how the word "ticker" came to be associated with stock symbols, you are not alone. The word evolved at the turn of the century when news of buy and sell transactions was delivered to brokers' offices by noisy machines that essentially stamped share price data onto thin strips of rolled paper (stock price data streaming across most financial news shows' screens offer us a modern-day version of this concept). These noisy machines made a very distinct ticking noise during their busiest periods, which is how tickers eventually earned their name.

There are even exchanges set up for companies that do not list on a national or regional exchange: the Pink Sheets and the Over-The-Counter Bulletin Board are a few examples of these kinds of exchanges. A company may be listed on only one exchange or on several exchanges - this depends on whether it meets an exchange's listing requirements and whether a company has applied for listing on that exchange.

The easiest way to find out where a company is listed is to visit your favorite finance-oriented website (such as Investopedia's Community) and look for the stock price quote of a company. In most cases, the exchange on which a company is listed will be found in parentheses next to the company's name.

Other data sources present a company's ticker and exchange differently. For example, in some instances you might find Exxon Mobil's ticker symbol represented like this: Exxon Mobil Corporation: XOM.N The same information is presented, but it is presented in a slightly different format.

In this case, after the company's ticker there is a dot followed by an abbreviation for the exchange on which the company trades. Remember, there are many different exchanges all over the world and each exchange has its own abbreviation.

There, you may be able to find information about where a company lists its stock and the multiple tickers under which stock may be listed. RioTinto, one of the world's largest mining companies, offers a great example of a company that trades on several different exchanges, as reflected by the company's investor relations website and by its tickers NYSE:RTP and OTC:RTPPF.

Whatever data source you choose to use, it is important for you to know which characters constitute a company's stock ticker and which characters represent the exchange on which that stock is traded.

Obtaining a ticker
All of this talk of tickers and exchanges begs the question, "How does a company obtain a ticker?" When a company applies to be listed on a particular exchange, it can apply for a specific ticker, subject to that ticker's availability. Some exchanges, such as the Nasdaq, even allow companies to reserve ticker symbols for up to six months they are listed.

Companies are not required to choose their own tickers, as the exchange may select one at random; however, some companies have used their ticker symbol as creative extensions of their brands. A few of the more notable stock ticker symbols are listed in Figure 3 below.

While clever and witty ticker symbols can be something of a novelty, they have nothing to do with a company's intrinsic value, the competence of a company's management team or its financial performance. However, a memorable ticker may draw attention to a name that could have otherwise slipped under the radar.

In some instances, tickers serve to remind the investing community of the industry in which a company operates, like Genentech's ticker, DNA, or a company's major brand, like Sun Microsystems' JAVA. Listing and Delisting Once a company has been approved for listing on an exchange, it must meet several standards to continue being listed on that exchange.

Significantly, most of the larger, national exchanges require companies to maintain current filings with regulatory agencies such as the SEC. If a company fails to meet any of the listing standards put forth by an exchange, then it may be delisted.

Usually, when a company exits bankruptcy or files its regulatory forms, the fifth letter is removed. An additional letter on a stock ticker is not always a bad omen - sometimes, it represents different classes of stock, new listings, preferred stock, or other situations. As you can see in Figures 4 and 5, below, there are several other instances where a ticker may have additional letters tacked on to it. 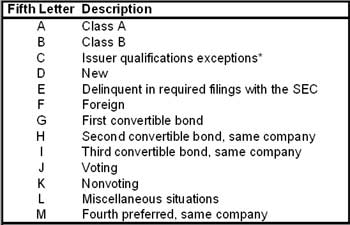 * The letter "C" as the fifth character in a security symbol indicates that the issuer has been granted a continuance on Nasdaq under an exception to the qualification standards for a limited period. Source: Nasdaq Glossary 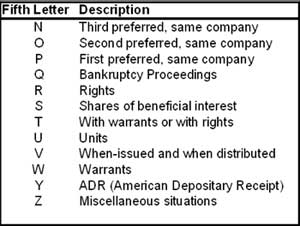 After a company has been assigned a ticker symbol and lists on an exchange, a company's management team may decide it would like to change its ticker. There are several reasons for this kind of decision: the company may have merged with (or acquired) another company, a rebranding initiative may be in place, or the company may have changed its name.

Changing a ticker is usually an administrative matter, as a company needs to submit additional paperwork and seek approval for such a change from an exchange. While most companies do not change their tickers often - at least not on the major national exchanges - ticker changes do happen.

Because companies want investors to be able to find their stocks, most companies issue a press release well in advance of a ticker symbol change. Press releases can also be found on a company's investor relations website.

Bottom line
Essentially, understanding ticker symbols is useful for those interested in learning about financial markets. Companies are identified by stock ticker symbols, which offer insight into where a company is listed and traded. There are many exchanges throughout the world, and each exchange has different listing requirements associated with it; thus, it helps to know on which exchange that company trades.

While a ticker symbol can inform you of where a stock trades, it can also tell you whether a company is delinquent in its regulatory filings or is undergoing bankruptcy proceedings, among other details.

Martha Shelton graduated from the University of Texas at Austin with degrees in finance and economics. She spent her time traveling before working on Wall Street in sell-side research. Shelton currently resides in New York; she is a CFA charterholder and holds Series 7, 63, 86 and 87 licenses.

In pictures: Learn to invest in 10 steps

In pictures: 10 tips for choosing an online broker