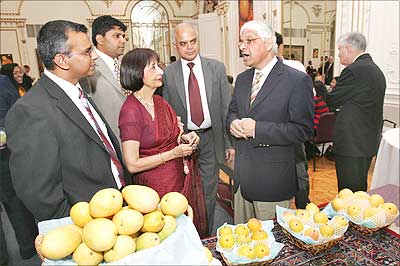 Mango mania is set to hit the Big Apple with India's agricultural exports body roping in several restaurants in the New York area to promote the king of fruits here.

The campaign by the Agricultural and Processed Food Products Export Development Authority to promote the fruit in the New York area began with a mango party at the Indian Consulate in New york on Thursday.

Several restaurants would be participating in the promotional campaign which began with the Minister of State for Industry Ashwani Kumar and Minister for Overseas Indian Affairs Vayalar Ravi lighting the traditional lamp along with Consul General Neelam Deo.

More than 100 guests saw a short film on Indian mangoes before the party began. The United States allowed import of Indian mangoes in April after a 18-year ban which was imposed following fears that Indian farmers were using too much pesticides. Earlier talking briefly to reporters, Ravi asked the Indian origin people to expand their knowledge of the country's heritage especially in the cultural field. (PTI)

Actress Madhur Jaffery strikes a conversation with  Minister of State for Industry Ashwani Kumar  (right) at the launch of Indian mangoes at the Indian Consulate in New York on Thursday.