FIIs turn to China as they exit Indian markets

In the past fortnight, FIIs have offloaded stocks worth Rs 13,110 crore 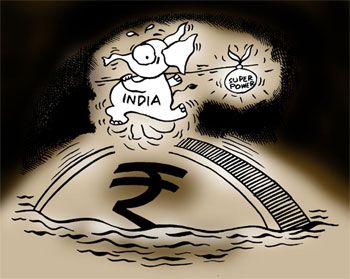 So far as foreign institutional investment flows into India are concerned, the tide seems to have turned of late. FIIs, which had so far in 2015 been investing in the Indian equity market, have sold Rs 3,467 crore (Rs 34.67 billion) worth of equities in May, according to official data.

In the past fortnight, they have offloaded stocks worth Rs 13,110 crore (Rs 31.10 billion), data suggest. The benchmark indices, the BSE Sensex and the National Stock Exchange’s Nifty have tumbled 9 per cent each during this period.

Since April 15, barring the big net inflow of Rs 16,353 crore (Rs 163.53 billion) on April 21 - on account of FIIs buying Daiichi Sankyo’s 8.9 per cent stake in Sun Pharmaceuticals - the FIIs have been net sellers on the remaining 13 trading days.

Why have the FIIs turned negative on India?

Weak corporate earnings, slow implementation of reforms, a nearly 40 per cent jump in crude oil prices to around $69 a barrel in six months, the possibility of a rate increase by the US Federal Reserve (Fed), and the rupee’s weakening against the dollar are some of the factors that have dented market sentiment.

Analysts suggest over-allocation of portfolio flows into emerging markets, including India, so far prompted investors to overlook weak growth. That apart, expecting the new government in India to catalyse quick rebound in earnings; expectations that decline in global commodity prices would prop up earnings and the hope that global liquidity would continue to boost equities, notwithstanding the correction in commodity prices, are some of the factors that kept the market sentiment buoyant.

However, Dhananjay Sinha, head of institutional research at Emkay Global Financial Services, feels the exhilarated expectations from change of guard at the Centre now seem to be waning, as a rebound in earnings growth has failed to materialise.

Where are the FIIs re-deploying this cash?

Analysts say the FIIs are now looking at China as an alternative investment destination in the Asian region. Going ahead, the FIIs will continue to buy stocks where they feel the fundamentals remain solid and where they see value, analysts suggest.

Rakesh Arora, managing director and head of research at Macquarie Capital Securities (India), explains: “The primary reason for FIIs’ withdrawal is China getting more money. It is one of the favoured markets at the moment and a lot of emerging market (EM) fund flows have been diverted there. India is facing a repercussion of that trend. Investment in Sun Pharma, too, would have sucked out some liquidity.”

Andrew Holland, chief executive officer, Ambit Investment Advisors, believes investors now want to get to China very quickly and rebalance their stance, especially as the consensus had been overweight on India for quite some time.

“Investors we have spoken to are taking a divergent view and putting incremental funds into China. I expect the selling to slow down now; a lot of switching of funds to China has been done only for the time being. While we don’t expect India to get incremental flows from FIIs in the second half of 2015, the selling should slow down,” he says.

Besides China, investors are also looking to increase their exposure to Vietnam. CLSA, for instance, plans to increase its Vietnam weight by one percentage point in its Asia Pacific (ex-Japan) portfolio, reports suggest. In a recent interview to Business Standard, renowned global investor Marc Faber had also suggested that Vietnam was an alternative investment destination where investors could get significant returns over the next few years.

As regards India, Macquarie’s Arora feels it is more of a case where the country might not get incremental funds from the FIIs going ahead, and not one of FIIs withdrawing money from the Indian market.

“Since Indian markets have corrected a fair bit from their peak levels, whether to withdraw from India or look to redeploy cash here is a difficult decision for FIIs. India is a better place to invest compared to China from a three-to-five-year perspective. I don’t believe this trend of withdrawal from the Indian market as seen over the past fortnight will continue at the same pace going ahead,” Arora says.