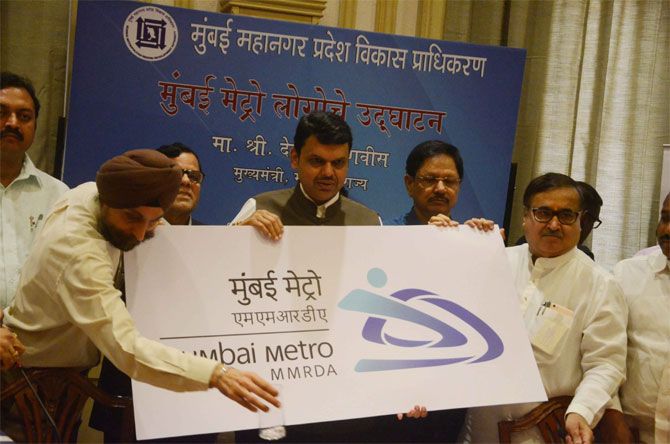 While the Maharashtra government has been adding more infra projects worth billions of dollars in the city since it came to power two years ago, work has not started on any of them. All the four already announced lines have remained on paper only.

The only functional metro service in the city of over 2 crore people is the 11-km Versova-Ghatkopar line operated by Reliance Infra.

The crucial Brihanmumbai Municipal Corporation elections are scheduled early next year and this is a prestige issue for both Shiv Sena - which has been ruling Asia's richest civic body for close to past three decades - and the BJP, which is leaving no stones unturned to wrest it from its bickering political ally.

The 24-km long Thane-Bhiwandi-Kalyan Metro-5 corridor will have 17 stations and cost Rs 8,416 crore, while the 14.5-km long Lokhandwala-Jogeshwari-Vikhroli-Kanjurmarg Metro-6 will have 13 stations and will involve an investment of Rs 6,672 crore, MMRDA said in a statement in Mumbai.

The other three Metro lines include the Rs 24,000-crore Colaba-Seepz underground line and two lines connecting the eastern and northern suburbs.

Both these projects will be placed before the state Cabinet for approval, the statement said.

Besides these Metro projects, the MMRDA meeting chaired by Chief Minister Devendra Fadnavis also cleared a Rs 194-crore project to set up 500 Wi-fi hotspots in the city as well as Rs 259 crore for widening the rail overbridge at Kopri in Thane.