IT services firms would no longer focus on large volume hiring from campuses like they did at least two to three years ago, as demands of clients are changing.

IT services companies are starting to hire engineers off campus as they see less demand for entry to mid-level jobs, with increasing digitisation of services.

Fresh information technology graduates are also being invited for off campus walk-in interviews to fill positions of junior engineers.

At least three IT services firms -- IBM, Tata Consultancy Services and Mindtree -- have officially announced their off campus recruitment drives this month. While IBM and Mindtree have invited applications for roles in India, TCS will hire fresh graduates for Singapore and mid-level engineers for locations across India.

TCS announced walk-in interview for people with two to eight years of experience for mid-level software engineer roles located across India last month, while the Mumbai-headquartered largest Indian IT service provider invited applications from freshers off campus for roles such as software developer, mobile application development, business analysis for Singapore.

Mindtree promised an annual package of Rs 275,000 for junior engineer roles, while IBM, which is taking the off campus route to hire from engineering schools, has assured “best in the industry” package for the off campus fresher hiring. The US-based IT major said in its advertisement: “This is an entry level on-campus hiring position, and the candidates must be in their final year of education and must obtain their degree before the start of employment with IBM.”

Those who bag Mindtree jobs have to pay for the two months’ training as well.

According to industry analysts and headhunters, IT services firms would no longer focus on large volume hiring from the campuses like they did at least two to three years ago. IMAGE: Mindtree, whose headquarters is in Bengaluru (above), promised an annual package of Rs 275,000 for junior engineer roles. Photograph: Courtesy www.mindtree.com.

IT services companies, both Indian and their global counterparts, have recruited fresh graduates in large numbers from engineering campuses from across the country. However, they have slowly reduced large on campus hiring as more entry-level works such as software maintenance, application maintenance are automated. Also, companies such as Wipro have started automating the jobs for the next level of IT employees.

Availability of engineering graduates seems to be a cause for worry as more and more IT companies concentrate on need-based hiring rather than bulk recruitment from colleges.

Interestingly, at times of slow growth, India has seen the number of graduates doubling since 2008 to almost 25 million in 2016. Of the total graduates, up to 18 per cent are from engineering and information technology streams.

Today, IT companies are struggling to foresee the prospects beyond two quarters due to volatility in traditional IT services demand and that has almost stopped large-scale on campus hiring, says Kris Lakshmikanth, chairman and managing director of The Head Hunters India.

“The trend of off campus hiring for both lateral and freshers will continue at least for the next couple of years due to need-based recruitment. These IT companies will no longer hire 20,000 to 30,000 graduates on campus in one season, rather they will look at 2,000 to 3,000 jobs at a stretch. A few hundred roles will be created for very specialised skills such as data science,” points out Lakshmikanth.

Infosys, India’s second largest IT services company, is not using more than 20 per cent of its fresher training capacity on its Mysuru campus, a person aware of the development told Business Standard. This facility can train 4,000-6,000 people. “They are not hiring in bulk and hence the training facility is not utilised in full capacity,” adds the person. 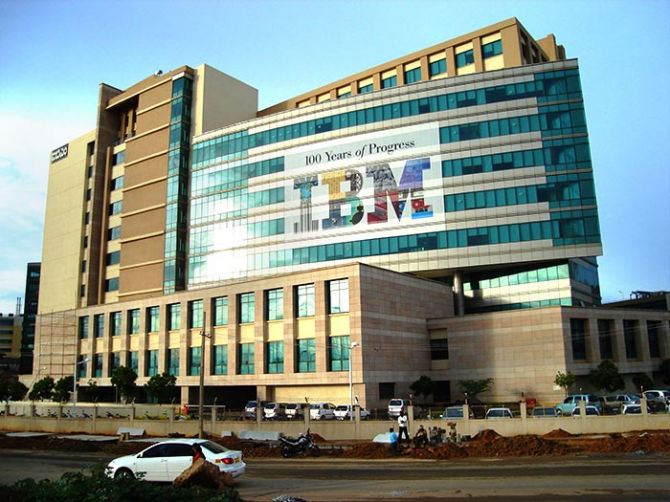 IMAGE: IBM, whose headquarters is also in Bengaluru (above), is taking the off campus route to hire from engineering schools, and has assured “best in the industry” package for the fresher hires. Photograph: Courtesy Vinoo202/Wikimedia Commons.

The sector hired 1.73 lakh people in India in FY17, as against two lakh people during the corresponding year.

Off campus hiring is usually meant for lateral recruitment and it does not serve the purpose of fresher hiring, says Malay Shah, senior director, high tech sector, for Alvarez & Marsal India.

“When it comes to freshers, off campus has not been the right option since you will get the same kind of people as you get on campus. Off campus hiring makes much more sense when an IT firm looks to take need-based people on board,” adds Shah.

He, however, says that such moves of hiring freshers out of campuses may be because of quick need for staffing a project. 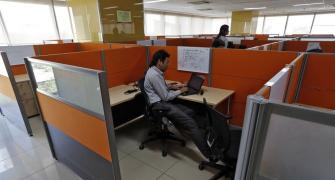 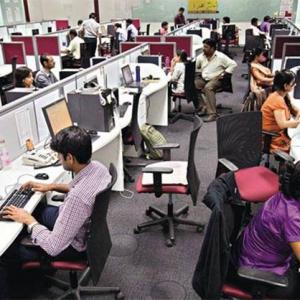 Small IT firms to step up hiring in US