Many giving double-digit returns, with India up less than one per cent; even so, it has done much better than other emerging markets.

However, the more advanced economies have given far higher returns. Equity market indices in four of the world’s five largest economies (and five of the top six) have outperformed India so far this year.

This comes as the US Federal Reserve seems set to raise rates next month. This is expected to trigger asset re-allocation away from EMs.

Many developed markets have given double-digit returns on a year-to-date basis. France is up 16.7 per cent, Japan by 16.9 per cent and Germany by 12.5 per cent, according to Bloomberg Data. In India, the Sensex is up 0.05 per cent, and the Nifty by 0.8 per cent.

In the US, while the Dow Jones index is down 2.4 per cent, the S&P 500 and Nasdaq have both given higher returns than the indices in India. 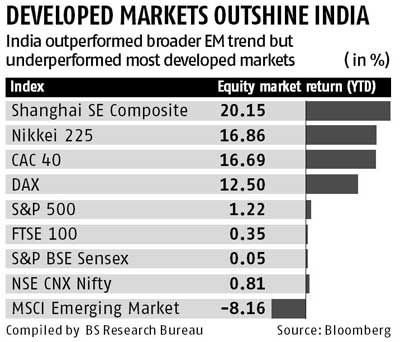 “The growth gap between emerging and developed markets is converging, as have the returns in the past few years. The decline in commodities has hit a lot of EMS, like Latin America, Russia and Brazil. There are pockets of resilience, such as India. But, it does appear that developed markets are doing better,” said Dhananjay Sinha, head of institutional equity at Emkay Global Financial Services.

He added this alone would not result in outflows from India or re-allocation to more developed markets. Other factors would have to be watched. However, the universe of EM funds was much larger than the India-dedicated ones.

In comparison, EM funds had cumulative assets of $794 bn. Index provider MSCI’s emerging market index has a weightage of around seven per cent for India. This translates into $55.6 bn in India money in EM funds.

Any outflows from such funds generally also has an effect on India. This was seen in the recent spate of underperformance in most EMs and subsequent withdrawals.

Inflow from India-dedicated funds for calendar year 2015 was $5.05 bn, according to the Kotak report. More recent figures were not available. But, EM funds were net sellers in India by $331 million in the same period.

EMs have underperformed this year, barring India. The MSCI Emerging Market index is down 8.2 per cent.

Experts, though, are bullish on India’s relative attractiveness, compared to the rest of the world.

“EMs have underperformed the developed markets. But, India accounts for a small portion of the overall weight in EMs, and it has outperformed the others,” said Prabhat Awasthi, head of equity, Nomura India, recently.

“Developed markets have done well in recent times but India remains the best place to be for long-term growth. We are a $2 trillion economy and it is expected that we should be able to double our size in a few years, maybe seven or eight years, if we are slow. Why would foreign investors want to miss out? The US Fed rate hike, so long as it is not a sudden and steep affair, shouldn’t be a problem as it is expected,” said Nilesh Shah, managing director of Kotak Mahindra Asset Management. 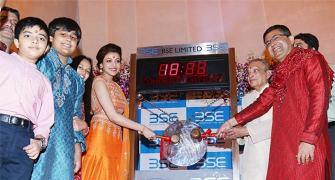 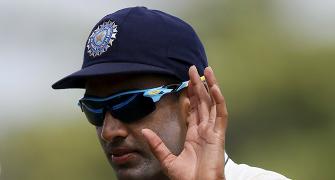