Take a look at the finance ministry website and you will see that DIPAM is not yet born, at least on its web portal, even after seven weeks of that announcement, says A K Bhattacharya. 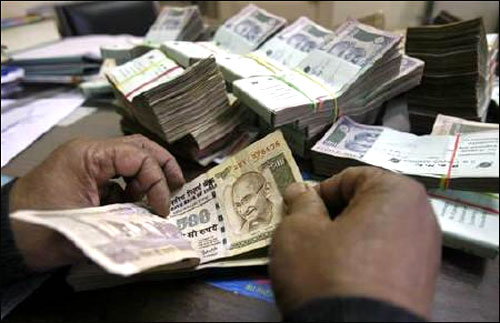 Image: Even more puzzling is the decision of the CCEA to put in place an elaborate structure to facilitate strategic disinvestment. Photograph: Reuters

How long should the government take in changing the name of a department of one of its central ministries?

One week after the announcement? Ten days? Or should it be one month?

In reality, however, not even about two months, it seems, would be enough.

If government websites are anything to go by, the department of disinvestment continues to be known just as that.

Take a look at the finance ministry website and you will see that DIPAM is not yet born, at least on its web portal, even after seven weeks of that announcement.

This may well be an oversight or perhaps the government is planning a mega event to mark the rechristening of a department that had been created by the Atal Bihari Vajpayee government as an independent ministry only to be later scaled down in importance and brought under the finance ministry as a department.

If it is an oversight, it is a little odd as the renaming of the department seemed like part of a larger political management strategy to push through privatisation, an idea with which sections of the Narendra Modi government and its political supporters do not seem to be entirely comfortable.

On February 17, the Union Cabinet Committee on Economic Affairs or CCEA approved a package of measures that gave the green signal to the government's plan for strategic sale of its stake in public sector undertakings or PSUs, or what is commonly known as privatisation.
A three-tiered structure was created to implement the strategic disinvestment plan.

At one level, NITI Aayog was entrusted with the task of identifying PSUs for strategic disinvestment, advising the government on the mode of sale and the percentage of shares to be sold and of suggesting methods for valuing the PSUs.

The second tier was at the level of the administrative departments that had control over PSUs identified for disinvestment.

These departments were given a big role in preparing the advance paper work for such sales, valuing the assets to be sold, preparing transaction and bid documents and in laying down clear timelines for the transfer of assets and management control.

The third level was the constitution of a core group of secretaries on disinvestment or CGD, headed by the Cabinet secretary, which would make the final recommendation for strategic disinvestment to the CCEA.

To assist this process, two inter-ministerial committees of officials were also set up - a group to undertake evaluation of assets of PSUs and another group to appoint intermediaries such as transaction advisors and legal advisors for disinvestment.

On February 29, the same day the Union Budget announced the strategic disinvestment policy and the renaming of the department of disinvestment, detailed circulars were sent out to all relevant departments of the government on the three-tier structure for strategic sales of PSUs.

That is why the puzzle over the delay in formal renaming of the disinvestment department as a department of investment and public asset management is even more confounding.

The act of renaming the department seemed to have been aimed at drawing the attention away from the privatisation exercise initiated simultaneously.

In essence, the new name was quite misleading, but the hope was perhaps to make the privatisation exercise politically palatable by arguing that the greater focus of strategic sales was on management of public assets. So, does this delay dignify something else?

Even more puzzling is the decision of the CCEA to put in place an elaborate structure to facilitate strategic disinvestment.

Remember the government had decided to go in for strategic disinvestment last year also!

The year has ended without any strategic sale, though over Rs 32,000 crore (Rs 320 billion) have been raised through sale of minority stakes in PSUs.

Was it because there was no Cabinet-level approval to a policy on strategic disinvestment last year?

And for this year, the government realised the procedural gap and made amends by getting the CCEA to clear a policy on strategic disinvestment before putting that in the Budget numbers?

If true, this reflects poor planning on the part of the government on as critical a policy issue as privatisation.

Hopefully, this would set at rest the policy uncertainty over strategic disinvestment and the political resistance the idea may be facing would soon be a thing of the past.

Divestment department gets a fancy name 'Dipam' but wings clipped