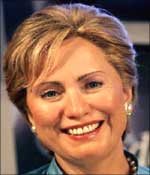 The US Secretary of State Hillary Clinton should be prepared to make 'compromises on global issues' on which the United States and India have disagreed in the past, during her maiden visit to India this week, a foreign policy expert said on Thursday.

Delivering a lecture at the Council on Foreign Relations on 'Clinton's Challenge in India' Evan A Feigenbaum, senior fellow for East, Central and South Asia, said these include the international trade regime and possibly some arms control treaties.

"The most pressing area will be climate change. Entrepreneurs in both countries may be developing green technologies, and that is a good thing. But there is a potentially contentious debate ahead about binding emissions reductions as both countries move toward Copenhagen," Feigenbaum said.

The administration's challenge will be to manage these disagreements towards compromise and ultimately, consensus without finger-pointing or the old acrimony reemerging, he said.

"One  way forward would be to agree on innovative bilateral initiatives, for instance, a US-India renewable energy partnership, or a US-India bilateral investment treaty that could provide ballast if the US and India continue to disagree on multilateral climate and trade arrangements," he said.

This goal, Feigenbaum said, must be to enhance the scope, quality, and intensity of the US India conversation, "and to do so at every level, not just to rearrange the deck chairs.

"Consider the investment treaty, initiated, then stalled, last year. Doha gets most of the media ink, but even bilateral US-India trade isn't all it can and should be," he added.

The US is India's number one trading partner in goods and services, but India is America's number 17 trading partner, putting it down the list, in a league with countries as small as Belgium, Singapore, and Malaysia.

"If Washington and New Delhi find Doha negotiations a hard slog, a bilateral treaty with new investor protections would at least help to enhance trade. So, too, would ending some of the structural impediments on both sides: India worries about restrictions on technology export licenses, rising American protectionism, and US visa policies, especially for skilled Indian professionals. The US complains about high investment caps, including in sectors of greatest interest to American firms, such as insurance, retail, and financial services," he said.

"So a rich bilateral agenda on renewable energy, trade, and nonproliferation could provide ballast in the face of disagreements in multilateral negotiations," Feigenbaum said.

He said that Clinton must also seek a more global partnership, "defined by cooperation with an India whose footprint now extends beyond South Asia"  west to the Persian Gulf, south to Africa, and especially east to Pacific Asia, where three emerging powers-India, China, and Japan-are economic partners but, often, strategic rivals.

"America's dialogue with India has been less global than with any other major power, even China, with whom the US has held three rounds of dialogue on Africa, three on Central Asia, multiple rounds on South Asia, even a dialogue on Latin America. Not so with India, which last year declined a US proposal for such regional dialogues. Nor do the US and India coordinate their foreign aid, even though India has become a donor to Africa and elsewhere,' he said.

The real test for the US and India will be whether they can turn common interests into complementary policies around the world, he said.

"The hardest challenge will be to do so amid a global recession and at a time when the trends in India's immediate region are very negative  in Pakistan, Afghanistan, and even Nepal. Only two things could substantially derail India from its current positive trajectory: a sustained global economic crisis, and anarchy in its immediate neighborhood," Feigenbaum said.

"Even as Clinton seeks an enhanced partnership with an emerging India and hopefully resists the old American temptation to link US-India relations to India-Pakistan relations  she needs to grapple with both possibilities, but to do so in close partnership with New Delhi," he said.

For fifty years until the late 1990s, the US mostly ignored India, treating it as a South Asian regional power with little weight on the global stage. India's anemic rate of growth gave it little stake in the global economy, he pointed out.
Its nonaligned foreign policy made diplomatic coordination difficult.

To the extent Washington focused on India at all, too often its spotlight shined solely on the India-Pakistan relationship: their rivalry, military competition, dueling nuclear weapons programs, and their several wars.

Now, Clinton visits a very different-and transforming-India. More than a decade of rapid growth has made India a major world economy, on track to be a top-five global economy by 2030, and the world's fourth-largest oil importer by 2025, behind only the United States, China, and Japan.

'The US needs to forge consensus with an emerging, and increasingly assertive, India whose footprint now extends from East Asia to Africa but which remains burdened by considerable unrealised potential, not least as a result of its crushing poverty at home," he said.