Check out the new Honda Civic. It's different 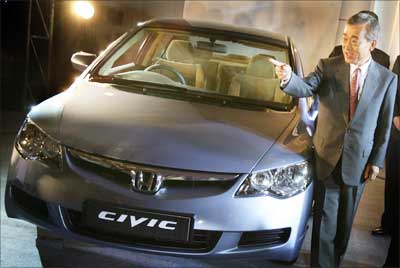 The launch was the first indicator that the Civic was going to be different. It began with the presence of Honda Motors President and CEO Takeo Fukui. It is the first time the company boss has launched a new car in India - at the debut of the City, Accord and the CR-V, only senior executives from Japan were present.

Then there was the launch itself: a rally racing enthusiast, Fukui drove the car onto the stage at a luxury hotel in Delhi. And he was behind the wheel for the Bangalore, Chennai and Hyderabad launches, too.

The first set of numbers for the Civic seem to bear that out. About 2,400 units of the car were sold in the first month (source: Society of Indian Automobile Manufacturers) and Honda Siel claims to have received over 4,000 bookings for the car already.

That's helped the company post a 57 per cent growth in July 2006 compared to July 2005. "We simply followed the four Ps of marketing - product, price, place and promotion," says Shimizu. Only this time, Honda's following the rules with a difference.

Honda Siel executives claim the Civic's biggest USPs are its design and features, custom-made for India. Take the Civic's spacious backseat, which comes complete with audio controls in the armrest, reading lights and a cup holder.

You won't find those features in the US and European models, where the car is an entry-level model. In India, on the other hand, the Civic is an executive car - the segment comprises cars 4501-4700 mm long. It's more likely to be chauffeur driven, with the owner sitting at the rear - hence the attention to the back.

Not that the front's been neglected. The dashboard is equipped with an audio system that has a 6-CD changer and plays MP3 files. The dash also has a "multiplex meter", somewhat like an aircraft cockpit: there are two independent displays for the speedometer and tachometer, located exactly within the driver's line of vision.

Another first is the paddle shift that's inspired from Honda's F1 racing cars. This way, the driver can enjoy the freedom of manual driving even in the automatic version, just by pressing buttons conveniently tucked away in the steering wheel.

The Civic also scores high on safety features, unlike the City. It comes fully loaded with airbags, an electronic brake-force distribution system, an anti-lock braking system and a collision-safe body - features that have won the car safety awards in the US earlier this year.

Many of these are features missing in more expensive cars - and the Civic will be quick to drive home the difference. With a Rs 11 lakh (Rs 1.1 million) tag, the car fits in neatly between the City Zx (Rs 800,000) and the Accord (Rs 17 lakh), and will offer stiff competition to similarly priced cars like the Toyota Corolla, Hyundai Elantra and Skoda Octavia.

According to auto analysts, this was a gap sorely felt by Honda. Loyalists looking to move up from the City, but for whom the Accord was out of reach, had no choice but to switch makers.

Right now, it makes sense for the Civic to target existing City owners looking for an upgrade - and that's exactly what the company is doing with an exchange scheme.

Shimuzu dismisses fears of the Civic cannibalising the City: "The two models are in different segments, so I do not foresee Civic hitting City sales in the long-term. Also, there's a big price difference between the two cars." After some thought he adds, "But yes, whenever a new car's launched, there's always a temporary impact on other models."

Honda Siel tantalised car enthusiasts and prospective buyers alike at the annual Auto Expo in Delhi earlier this year. It displayed the Civic, but gave no hint as to when the car would be launched.

Visitors to the company's stall were, however, encouraged to recommend features they'd like to see in the car and drop their notes at the stall.

That's pretty routine for carmakers, so when the Civic was launched barely six months later - having incorporated several features suggested by Auto Expo visitors - it took everybody by surprise.

Also raising eyebrows is the lack of a high-decibel ad campaign for the Civic, the high jinks at the launch notwithstanding. For a month before the launch, print ads announced the imminent arrival of the Civic, while sales staff at all Honda showrooms wore Civic t-shirts.

Now the only advertising is online, on popular websites as well as search engines like Google and Rediff. Instead, the company is targeting existing City owners and the list of potential buyers gathered at the Auto Expo, through direct mailers and emails.

Of course, Honda Siel's not invested heavily in advertising for its other cars, either, relying instead on promotions and online advertising. This time round, it's also counting on word-of-mouth publicity.

"The Civic brand carries so much mythology that it doesn't need advertising. Besides, it's a car people have been waiting for," says Anand Halve, co-founder of Mumbai-based brand consultancy Chlorophyll.

The company, however, has a different take. "Directly targeting our current customers made more sense. They were the best people to approach for upgrading or buying a second car for the family," says Shimizu.

And the winner is...

The campaign's timing coincides with the Civic launch and you don't need to be an auto expert to figure out that Corolla is readying for a slugfest.

It doesn't help that Corolla's sales have been moving to a lower gear: TKM sold 8,866 units of the car this year, 1,122 less than last year (source: SIAM). The reason: the Corolla is a four-year-old model and executive car buyers look for the latest.

"The Civic has the best brand. But cost-conscious buyers may opt for the diesel Octavia. Diesel versions would give the Civic more mileage in the long run," says a Mumbai-based auto expert. Yet Honda doesn't intend to launch diesel cars in India, claiming its fuel-efficient cars are a better option.

The race will intensify in the coming years when upgrades of the Octavia and Corolla are launched. Another rival, Hyundai Elantra will introduce a pepped-up version next year. "This will give the Civic serious competition," says an auto expert. Will the Civic manage this long drive?