China's state-run trade union, which came under fire for not taking up workers' rights issue when they went on flash strikes demanding higher wages last year, has floated the idea of introducing collective bargaining to address labour disputes. 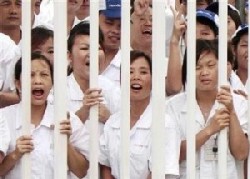 The All China Federation of Trade Unions (ACFTU) is planning to introduce collective wage negotiation, meaning talks between union representatives and heads of enterprises in all enterprises over the next three years, to reduce labour disputes, said Zhang Jianguo, head of the collective contract department of the Federation.

The idea is being floated in the backdrop of spate of strikes by workers in a number of factories including that of Toyota and Honda automobile units demanding higher wagers which were unheard of during the past three decades ever since the Communist country began introducing economic reforms.

The cheap labour environment with no unions other than ACFTU attracted the billions of dollars of Foreign Direct Investment, (FDI) turning China into world's factory.

China's private sector too started booming taking advantage of the abundant availability of millions of migrant labour from rural areas.

Last year's spontaneous strikes coupled with spate of suicides by workers in Foxcon, the biggest electronic multinational manufacturing products for top international companies like Sony, Apple, Dell etc apparently dejected by poor working conditions, made the government to revise minimum wages through out the country to 1000 Yuan ($ 150).

But China has seen an increasing number of labour disputes in recent years, with more workers resorting to strikes for higher pay.

Mediation organisations received some 406,000 labour dispute cases in 2010, a year-on-year rise of 12.1 per cent, according to ACFTU figures.

A CFTU spokesman, Li Shouzhen, said low pay and the slow pace of wage rises were to be blamed. But Zhang argues collective wage negotiation has led to the establishment of a reliable wage increase mechanism in some places.

"Wages of employees in enterprises that adopt collective wage negotiation are 10 per cent to 15 per cent higher than their counterparts without the protection of the mechanism," he said.

Zhao Wei, deputy director of the China Labor Studies Center at Beijing Normal University, said it will be some time before collective wage negotiation takes root.