News
Business
Movies
Sports
Cricket
Get Ahead
Money Tips
Shopping
Sign in  |  Create a Rediffmail account
Rediff.com  » Business » This CEO wants to bat for cricket in the US

This CEO wants to bat for cricket in the US 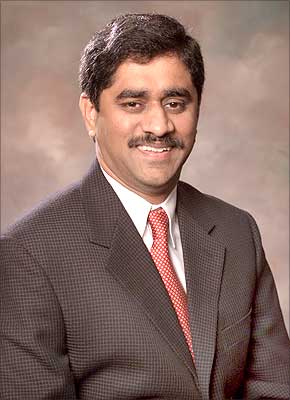 Chief executive officers usually love to play golf or tennis, but few take interest in getting involved in sports administration. Ram Varadarajan is an exception.

Varadarajan, president and CEO of Arcot Systems, an authentication software company headquartered in Sunnyvale, California, has joined the electoral fray for the United States of America Cricket Association elections slated for March 29.

Varadarajan, an Indian Institute of Technology-Bombay graduate, is contesting for USACA president, leading a team of cricket administrators and leaders contesting for other positions to challenge the incumbents.

Varadarajan, a self-confessed cricket fan since childhood, said the current administration has failed to capitalise on the market opportunity for popularising cricket.

"If you look at baseball or basketball, they are all owned by companies or people. That model has worked very well for many years in America and there is no reason why such things cannot happen for cricket as well," he said.

He said he was pained to see that the USACA, the apex cricket body in the US, has not been able to bring corporate commitment to such a popular sport as cricket. In the last few years, he said, there has been a significant increase in the monies spent globally on cricket by corporate sponsors and commercial organisers, but alleged that the current body has not been able to reap the benefits.

In response to a question, he said about two years ago he helped organised a national under-15 tournament which gave him some exposure to the state of the organisation of cricket in the US. "I realised that a lot more could be done about cricket in America than what was on the ground. And that is when I decided to do something for the game and to move the ball forward," he said.

He said the facilities for playing cricket, for example, are very poor in America. There are not enough fast wickets, no stadiums, not many matches and youth programs are almost non existent. "On the professional level, no international cricket is coming to America because we are living under ICC [International Cricket Council] suspension," he said.

Arvind Patel, a store worker in Jersey City who has been playing cricket since 1990, agreed there was need for providing facilities to the cricket cognoscenti in the US. "We never get a field to play cricket. People play on the parking lot or in parks. There are soccer fields, baseball fields, but not one for cricket. The cricket association in this country does not seem to care," Patel said.

There are at least 50 teams that play in New Jersey League. "But they all play without wickets, play in parks and all," he said.

Varadrajan said even if for argument's sake it is admitted that Americans are not interested in the sport of cricket, it can be promoted among cricket lovers and popularised in the country over time.

"There are some 20 million people from cricket-playing nations who live in America. That market is huge in itself and bigger than the population of New Zealand. With a little bit of effort we can make cricket more popular, in schools, colleges and things like that and make it a truly professional sport," he said. "Cricket in the US needs to be a sport that is ultimately commercially viable, fun to play, and open to all," he said.

Varadrajan, who came to the US in 1982, holds an MS from Louisiana State University.