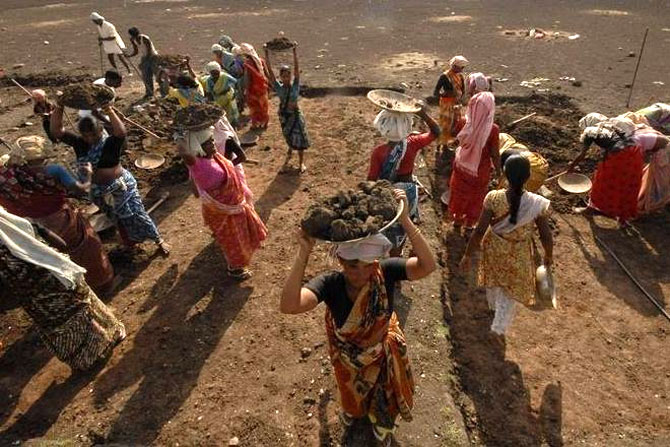 The Budget is in line with the development priorities of the nation. Several initiatives in the rural space such as ensuring flow of credit, enhanced crop insurance coverage, soil health cards, geo-tagging of MNREGA assets, setting up of the National Rural Drinking Water programme are steps in that direction.

For the banking sector, the thrust to digital economy is on expected lines. Affordable housing gets the status of infrastructure, which will be beneficial for the banks, borrowers and builders.

Given the domestic and international macroeconomic environment, it has achieved the much-needed delicate balancing factor.

The Budget 2017-18, in a very balanced way, addresses both the priorities of giving an impetus to growth and maintaining fiscal prudence.

Finance Minister Arun Jaitley has prioritised public spending for capital expenditure with a focus on the railways and roadways.

This approach will have long-term benefits for economic productivity.

The focus on these areas and affordable housing would have a multiplier effect on the economy, boost employment generation and make growth inclusive.

The continued emphasis on broadening the tax base and moving towards digital payments is commendable. Overall, there is stability in the policy approach.

With large allocations for agriculture, rural road infrastructure, skill development and electrification schemes, this Budget has the potential to change the face of Bharat - India beyond our cities.

The government’s spending in schemes such as MGNREGA & Pradhan Mantri Awas Yojana is the highest ever.

This is a boost for core sectors such as agriculture, steel, manufacturing etc., and will convert into increase in consumption in rural India.

Such schemes for the manufacturing sector, combined with the social sector initiatives, will bring robust growth for the automobile sector catering to rural India, both in the two-wheeler and four-wheeler segments.

I think, this is an excellent Budget. It is growth-oriented and the government is making considerable changes in a number of areas.

The thrust on agriculture, rural development, housing, infrastructure and electrification bodes well for everyone, including those in the villages, who felt the pain of demonetisation.

There is also an emphasis on women and children in this Budget, which is good. Also, the negative effect of demonetisation is fast wearing off.

The remonetisation effort, that has been kicked in, will get a boost with this Budget. The move to give affordable housing infrastructure status is also a good move.

Finance Minister Arun Jaitley needs to be commended for the deft management of fiscal resources and keeping the deficit under control.

The thrust on the agricultural, rural and infrastructure sectors provide the major pegs for growth.

Skilling and education have received the desired impetus. Alongside, changes in the tax structure for the middle class will spur consumption due. The push on tax compliance is welcome.

The abolition of the Foreign Investment Promotion Board is a bold decision, which will take India a few notches higher in the ease of doing business.  Above all, for the first-time ever, definitive steps have been taken towards cleaning up political funding.

Over the past couple of years, the finance minister has been able to successfully demystify the Budget. Although not structurally reformist, the Budget has many positives.

Abolition of Plan and non-Plan expenditure will help optimise resources and spend, as required.

While not a populist one, a notable highlight is the focus on reducing taxation on medium and small enterprises.

The government continues to have a significant thrust on the rural economy, social reforms, infrastructure and affordable housing.

However, it could have been more reformist by de-bottlenecking and reinvigorating the investment climate, thereby showing a path to structurally higher growth.

The finance minister has presented a balanced Budget and operated with fiscal prudence. The upsides provided by the impending GST implementation, as well as imminent remonetisation, explain this cautious approach.

There were certainly no negative surprises, which has pleased the markets. Initiatives to clean up political funding and the innovative step of introducing electoral bonds are welcome.

The proposal to reduce corporate tax rate to 25 per cent for start-ups and SMEs with revenues up to Rs 50 crore are positive signals.

The Budget fell short in providing enough impetus for private sector investment, manufacturing and exports,  needed to propel the Indian economy to an accelerated growth path.

The Budget 2017-18 retains India’s macro stability advantage over its peer group by pursuing a path of fiscal consolidation, and gives a boost to growth by focusing on small and medium enterprises, infrastructure and housing.

It does not upset the capital markets by changing long-term capital gains laws and clarifies on indirect transfer tax for foreign portfolio investors.

No wonder, the market came away feeling good about the Budget, despite no tax cut for large companies, absence of clarity on general anti avoidance rules (GAAR) and low allocation for state-owned banks’ recapitalisation.

The slew of reforms proposed by  the finance minister will create a favourable environment to provide the necessary elevation to the Indian economy.

Key positives like maintaining the fiscal deficit target at 3.2 per cent of GDP, enhanced rural spending, focus on infrastructure development, social sector investments and reduction in the tax rate for the lower income earners will benefit the rural sector.

One must also appreciate the qualitative changes that the Budget is seeking to bring about.

The reforms on political funding, abolition of Foreign Investment Promotion Board and clarity on indirect transfer provisions for foreign portfolio investors are other welcome moves.

This is a Budget that has digital economy written all over it. Internet infrastructure gets support through multiple initiatives.

Introducing a payment regulatory board under the aegis of the Reserve Bank of India will provide much-needed guidance to the payments sector.

Target to provide one million point-of- sale terminals and two million Aadhaar-based payment systems will add a large number of merchants to the ecosystem.

Initiatives to promote BHIM app will also encourage consumers and merchants to go cashless. Removing service charges from IRCTC bookings is another welcome step. As a result, more people and businesses should enter the digital and formal economy.