The UPA is suddenly skating on very thin ice. A quick calculation by Congress managers soon after the unprecedented walkout by Congress's friends and foes alike has thrown up the figure of 275 in the ruling alliance's kitty. This is just 3 more than the majority mark of 272, "and a matter of grave concern", said a senior Congress leader.

Among those who participated in the first ever walkout during a budget speech included the Left parties, the Bharatiya Janata Party and its National Democratic Alliance allies. However, the more surprising aspect was the walkout by parties who have offered outside support to the United Progressive Alliance -- Lalu Yadav's Rashtriya Janata Dal, Mulayam Singh Yadav's Samajwati party and Mayawati's Bahujan Samaj Party.

The figures for RJD, SP and BSP read as 46, which placed the UPA in a more than comfortable position.

Pranab Mukherjee's "oil decision" has fuelled what could well turn out to be a political crisis for the government, say party managers. At the very least, it would lead to huge bargains being made and political parties asking for their pound of flesh with the BJP having said that they would move cut motions on petrol prices.

In the event that the parties, which walked out on Friday, decide to support the cut motions or move cut motions of their own, the government could be running from pillar to post, cobbling together the numbers.

Sources say that what fuelled the anger amongst the parties was the government assurance made just the day before on Thursday that all steps are being taken to contain prices and that very soon the downward movement would be visible.

But in less than 24 hours, the government did a U-turn and went ahead and announced a partial roll back of its stimulus package with the result that both petrol and diesel have gone up, leading to an across the board increase in prices.

The question being asked in the corridors of power is why Finance Minister Pranab Mukherjee chose to announce these measures in the budget, when there was no need to do so as he could easily have made the announcement later.

Sources close to the Finance minister say that he was merely keeping a promise he made in the last budget presented by him in 2009 where he had said that he would announce his decision in the next budget after receiving the Kirit Parikh report.

And true to his word, the Finance Minister went ahead with a partial rollback of the stimulus package, taking on the entire responsibility for the increase on himself, said a senior leader, even though it was a decision cleared at the highest level in the government.

The thinking in the government is that this is the year when they can take risks and bring in decisions, which may not be popular or even populist since the UPA is just one year into the government and is not facing any major elections. But by then it may be a different story.

There are assembly elections in West Bengal and Tamil Nadu, and with two major allies breathing down their neck, the government would have to resort to populist measures.

Trinamool Congress chief Mamata Banerjee is already very angry. She returned to Kolkata on Friday evening, rescheduling back her departure. While in Delhi, she refused to react to the budget at all; in Kolkata, she has announced that she would launch a movement against the Union budget. How she would react next year is not too difficult to guess.

A senior Congress minister sarcastically reacted to Mamata's threat, saying: "Thank god she did not walk out from the House along with the other parties, as she may forget that she is a minister in the UPA."

Pranab has slapped a service tax on Railways, further angering her, say her party leaders.

Lalu Yadav, once known as the person closest to Sonia Gandhi, is now thundering the loudest. In his typical fashion, he said: "Didi (Mamata) aur dada (Pranab Mukherjee) ne banta dhaar kar diya (they have failed us)".

been left out in the cold by the Congress, it has taken Lalu Yadav almost a year of remaining on the sidelines and away from the power play of politics to get his back at the congress. Coupled with this are the coming assembly elections in Bihar this year where he is obviously using the price rise issue to politically signal to his constituency that he would not support such measures at any cost.

So intense is the anger of both the Yadavs (Mulayam and Lalu) against the Congress that they have gone to the extent of telling the BJP that they would have supported them to form the government if they had not brought down the Babri Masjid. And in spite of that qualifier, both the Yadav leaders along with the Left and the BSP have joined hands with the BJP on the issue of taking on the government on price rise, but how far this camaraderie continues would depend on the Congress party's skills to create differences amongst them.

After the walkout, in an impromptu press briefing, the Opposition leaders thundered against the move, saying they would not allow Parliament to function unless there was a rollback. "I was listening to the budget intently but as soon as Finance Minster said that he is hiking the prices of petrol and diesel, the entire gathering felt that he had taken a decision against the interests of the common man, the farmers and the poor," said Leader of the Opposition and BJP leader Sushma Swaraj.

But both Minister of State with the Prime Minister's office Prithviraj Chavan and Parliamentary Affairs Minister P K Bansal have said there is "no question of a rollback".

Lashing out at the Opposition walkout, Parliamentary Affairs Minister Pawan Bansal described it as "the nadir of politics" and emphatically stated; "We have the numbers."

Also, many in the Congress too are believed to be unhappy about the announcement, cornered as it has been on the food inflation issue.

While no one is actually questioning the government's move to start withdrawing subsidies, it is the timing that is being questioned. Even, Milind Deora, young Congress MP and son of Petroleum Minister Murli Deora said: "The timing of the hike is not right".

Congressmen also feel that this largely unpopular announcement should have come at the end of the budget speech. The damage from an Opposition walkout would have been less then.

Government sources say the fuel hike is a "well-considered move" and Pranab Mukherjee will explain the decision to Congress MPs.

Former ally and now daggers drawn, the CPI-M accepted this walkout was unprecedented, but said they would continue. Senior leader Basudeb Acharya said: "We are completely against this and it has never happened before during the presentation of the budget that the Opposition has walked out. This is totally unprecedented because the way the prices are escalating and the duty of petrol and diesel have also been increased. To express our stance against this we, the Opposition, have walked out and we shall continue this."

In his defence, the finance minister clarified that he had only removed concessions that were no longer required. "In my budget, I have not put any new custom duties. All have already existed. As far as fuel hike goes, when it was required, we gave a concession, but a concession in the current situation is no longer required," he said.

Congress leaders concede that while it is touch and go in the Lok Sabha at the moment, in the Rajya Sabha the numbers are even less, with the congress expected to lose more mps once this round of biennial elections to the upper house are over next month. While no one wants to bring down the government, say even senior opposition leaders, they admit that accidents can happen as happened in the case of the Vajpayee government which fell by one vote, much to everyone's shock.
Renu Mittal in New Delhi
Related News: Trinamool Congress, Bharatiya Janata Party, Pranab Mukherjee, Lalu Yadav, UPA
Print this article 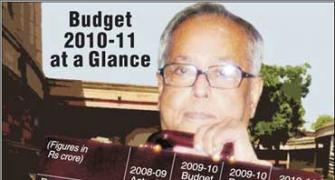 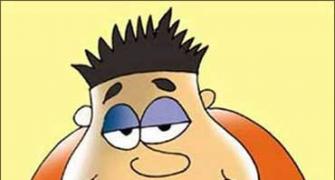 Budget: 12 measures that affect you! 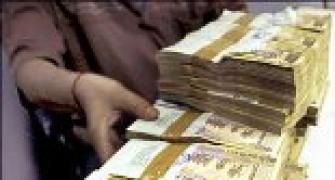 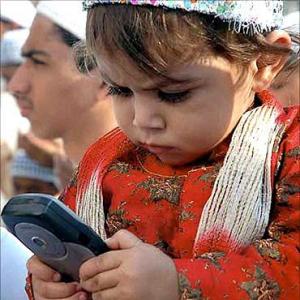 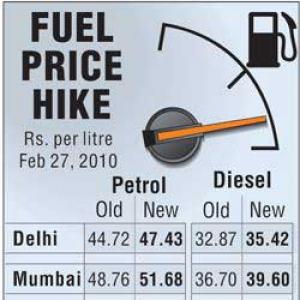