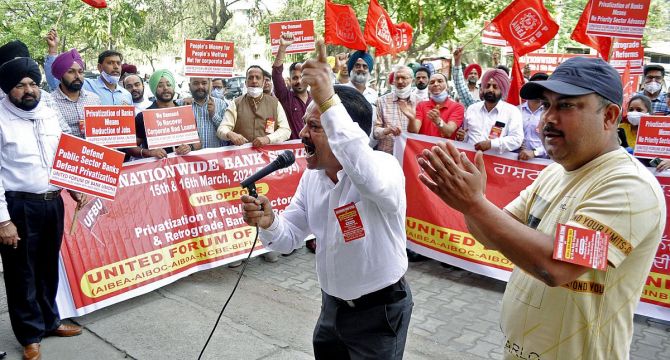 "Strike was a full success, employees and officers stood with us.

“The way they participated and raised slogans, it shows their disapproval of the government decision very clearly.

"We got support from all trade unions, some farmer organisations, lot of political parties have supported us," AIBEA general secretary C H Venkatachalam told PTI.

In a statement, the Centre of Indian Trade Unions (CITU) congratulated the participating employees and officers across the country for protesting "against the BJP government's moves to privatise public sector banks".

"Around 10 lakh bank employees and officers participated in the strike called by the United Forum of Bank Unions (UFBU), paralysing the entire banking sector.

"The joint platform of central trade unions and almost all independent industrial federations in the country extended full support to the strike.

“Tens of thousands of workers participated in the demonstrations across the country, in support of the strike," CITU said.

Venkatachalam said the bank unions will again engage with the government on the issue and try to convince it that the proposed move is not in favour of the economy or the general public.

He said if the Centre feels that there are problems in the running of the public sector lenders, the bank unions will try to address those concerns.

Before going for the strike, conciliation meetings were held with the Additional Chief Labour Commissioner on 4th, 9th and 10th March.

The UFBU offered to reconsider the strike provided the government reconsidered its decision, he said.

"Again we will tell them, whatever are the grievances against the running of the public sector banks, we are ready to talk and we will address the concern and then there is no need for privatisation.

"But still if you are not convinced...then more strikes will happen. If they are not ready to listen to us and go ahead with their decision on the back of their strength in the Parliament, then there will be more strikes in the future," Venkatachalam warned.

Bank unions claimed as many as 10 lakh staffers took part in the two-day pan-India strike.

Normal banking services were greatly affected because of the strike, the All India Bank Employees Association (AIBEA) said.

The government has already privatised IDBI Bank by selling its majority stake to LIC in 2019, and has merged 14 public sector banks in the last four years.

Bank unions said the PSBs are earning operating profits and there is no need for privatisation.

"Hence if bad loans are recovered from the private corporate companies, banks will be earning much more.

“Private sector is responsible for the huge bad loans. In fact they should be punished for this crime.

“But the government is rewarding them by handing over the banks to the private sector," AIBEA said.

Seeking co-operation and support of the people in their 'struggle to save the PSBs', the bank unions said if the government proceeds with its decision to privatise the lenders, they will be left with no option than to further intensify their agitation with more prolonged strikes.

CITU urged the bank employees to intensify the struggle to save public sector banks from being sold off to corporate, both Indian and foreign.

"CITU and the joint trade union platform have already extended their support to the country wide strike of the general insurance employees on 17th March and that of the LIC of India employees on 18th March, against privatisation.

"CITU members will actively participate in solidarity actions on these days," it added. 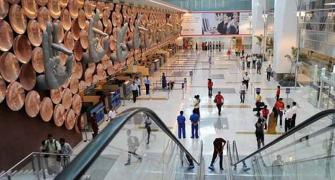 Delhi, Mumbai airports are not being 'sold out' 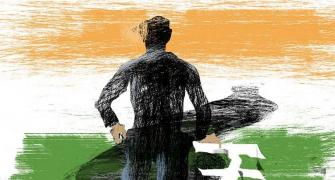 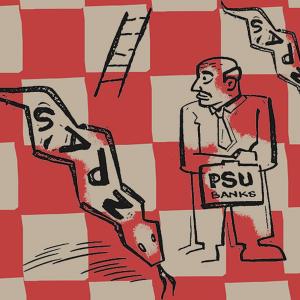