IMAGE: Kindly note that this image has been posted for representational purposes only. Photograph: Lucy Nicholson/Reuters.

Besides the pandemic which exacerbated sluggish sales, a structural slowdown, led by a slew of regulatory changes, coupled with a sputtering economy, had put auto sales in the slow lane in 2019-20.

Auto companies are now readying for yet another tough year -- the third in a row -- amid the raging virus and restrictions.

The decadal growth in the auto industry has now slowed from 12.8 per cent to 1.8 per cent, indicating there is a lot more to the slowdown, and that pandemic alone cannot be blamed for the multi-year lows each segment has seen in FY21.

“On the sales front, a deep structural slowdown in the industry even before the pandemic, combined with the impact of Covid-19 in FY21, has pushed all vehicle segments back by many years. Recovery from here will require time and effort by all stakeholders,” said Kenichi Ayukawa, president, Siam, in a statement.

There is uncertainty in the value chain owing to shortage of semiconductors, lockdowns, and raw material, he said, adding that, “In an environment of uncertainty, instead of trying to predict the future, we will all work hard to create it”.

But analysts remain positive about the road ahead. They believe the fundamentals of the market remain strong.

“Growth has been choked by the pandemic and this has also impacted CAGR,” says Mahantesh Sabarad, head-retail research at SBICAP Securities. This has to be seen in the context of the emission norm change which took effect from April 2020, he said. The manufacturers entered the year with a higher cost structure and lower volumes as the BS-IV models had to be phased out and BS-VI models had to be ramped up gradually, he added. Sabarad expects volume recovery to quicken as the low-base effect of the past two years catches up.

FY21 was one of the worst years for the industry, with sales in each segment touching multi-year lows. With sales of 2,711,457 units in the domestic market, passenger vehicle sales touched a six-year low. Similarly, with a volume of 15,119,000 units, motorcycle and scooter sales in the domestic market were pushed back to the 2014-15 volumes. Three-wheelers, with unit sales of 216,000, were battered the most, as volumes got dragged to a 19-year low. Commercial vehicles sales, too, declined to the lowest in 11 years.

Helped by a low base of last year and a strong preference for personal mobility, most passenger vehicle makers saw a bumper growth in the January quarter. With the resurgence in Covid cases and the uncertainties, the March quarter volumes showed sequential decline to 514,000 units, from 522,000 units a year earlier.

If one looks at the fourth-quarter sales, which might include some deferred sales from previous quarters, only the passenger vehicle segment at 934,000 units was marginally above the previous high of January-March 2018, said Rajesh Menon, director general, Siam. The other segments -- be it commercial vehicles, two-wheelers, or three-wheelers -- were lower than the March 2018 volumes.

But the lower sales volume is not making Kavan Mukhtyar, partner and leader-automotive at PwC, sceptical about India’s auto market.

“There is nothing fundamentally wrong with the growth story,” said Mukhtyar, adding had it not been for the pandemic and the resurgence in the number of cases, auto sales would have surged. He, however, added that a broad-based turnaround will depend on economic recovery. “Economic recovery needs to be pushed forward and it’s not going to be easy,” he said. 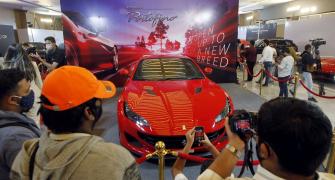