Kishore Biyani-led Future Retail Ltd (FRL) on Thursday told the Delhi high court that Amazon was opposing the Rs 24,713 crore deal with Reliance as the Mukesh Ambani company was a competitor, a contention denied by the US-based e-commerce giant which said it was interested in salvaging FRL. FRL contended before a bench of Chief Justice D N Patel and Justice Jyoti Singh that Amazon was not concerned if the deal falls through then all the shops of the Indian company would be closed down and it's more than 25,000 employees would be without any livelihood.

Senior advocate Harish Salve, appearing for FRL, told the court that the US-based e-commerce giant was only concerned that the Mukesh Ambani group company should not get the shops as they are a competitor of Amazon.

However, the contention of FRL was opposed by Amazon, represented by senior advocates Gopal Subramanium and Rajiv Nayar, which claimed that it did not want the Indian company to sink and was still interested in salvaging it.

Amazon has also contended that the appeal, by FRL against the February 2 order of the single judge, was not maintainable.

Salve commenced arguments on behalf of FRL and said that Justice J R Midha on February 2 passed the interim order to maintain status quo despite being aware that Justice Mukta Gupta had earlier on FRL's suit permitted statutory authorities to take a decision regarding the deal with Reliance.

Salve said that Justice Midha was also informed that Amazon's appeal against the order of Justice Gupta was pending before a division bench which had not passed any interim orders.

He said that the latest order by the single judge was contrary to the earlier one and has resulted in two conflicting orders by the same high court.

The senior advocate said that the single judge ought to have waited for the division bench' decision before any interim order to maintain status quo, a relief which was not even sought in the suit filed by Amazon.

Salve said that not staying the February 2 order "would be an absolute disaster for my client (FRL)" as the proceedings before the National Company Law Tribunal (NCLT) for approving the amalgamation scheme have been put on hold.

FRL, in its appeal filed through law firm Naik and Naik and Company and advocate Harshvardhan Jha, contended that the February 2 status quo order will effectively derail the entire scheme which has been approved by statutory authorities in accordance with law.

Opposing the contentions, Subramanium told the court that the proceedings before NCLT were initiated only last week and have been adjourned till March 1.

He said the February 2 order was an interim protection for Amazon till the court pronounces its decision on the suit filed by the US e-commerce giant.

"No case is made out for not awaiting the single judge's order," he said.

Amazon, in its suit before the single judge, has sought enforcement of the EA order restraining FRL from going ahead with its Rs 24,713 crore deal with Reliance Retail.

It also sought to restrain Kishore Biyani-led Future Group from taking any steps to complete the transaction with entities that are a part of the Mukesh Dhirubhai Ambani (MDA) Group.

Besides that Amazon has also sought detention of the Biyanis, directors of FCPL and FRL and other related parties in civil prison and attaching of their properties for alleged "wilful disobedience" of the EA order.

Subramanium told the bench on Thursday that Amazon was not interested in sinking FRL and always wanted a long term relationship with it.

"We were throughout the COVID-19 pandemic engaging with FRl to salvage the company. Even now we are interested in salvaging it. Why would we want to sink it," he said.

He said that the earlier order of Justice Gupta contained certain observations regarding the various agreements between FRL, Future Coupons Pvt Ltd (FCPL) and Amazon and they were not findings.

Justice Gupta in her December 21, 2020 order had said that a combined reading of the  shareholding agreements (SHA) of FRL and FCPL and the share subscription agreement (SSA) between Amazon, FCPL and the Biyanis show that they not only protect Amazon's rights in respect of investments it made in FCPL, they also "transgress" to control over Future Retail which requires government approvals and in absence thereof, were contrary foreign direct investment (FDI) rules framed under the Foreign Exchange Management Act.

However, the judge had not agreed with FRL's contention that the October 25, 2020 Emergency Arbitration (EA) order of SIAC was without legal jurisdiction and for this reason the award was invalid.

Subramanium argued that the EA order of the Singapore International Arbitration Centre (SIAC) was akin to a direction of the court and therefore, was binding on FRL which ought to have either sought its vacation before SIAC or challenged the same in a court here, instead of approaching statutory authorities to approve its deal which had been put on hold by the EA order.

In August last, Future had reached an agreement to sell its retail, wholesale, logistics and warehousing units to Reliance.

While reserving order on Amazon's suit to enforce the EA order, Justice Midha directed all concerned authorities to maintain status quo in relation to the matters which are in violation of the arbitral award and to file status report with regard to the present status within 10 days. 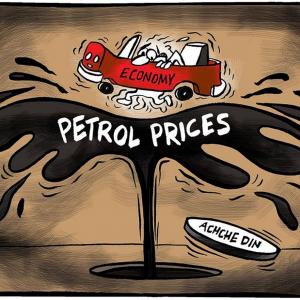 Only tax cut can help, oil cos on high fuel prices