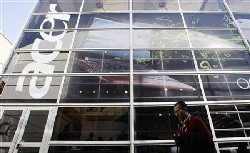 The company brings in the full capacitive Acer Iconia tab A500 on both Android Honeycomb 3.0 and Windows 7 platform.

"With the launch of the Iconia range of tablets in India, we believe this technology will change the dynamics of consuming digital content. With the growing demand for the tablets in India, we expect tablets to significantly contribute to our overall revenue in the calendar year 2011," Acer India Managing Director W S Mukund told reporters in Mumbai.

Acer India plans to double its dealership network to 5,000 from present 2,500 by end-this year. It has a manufacturing facility in Pondicherry, with a capacity of 70,000 units per month.

Source: PTI© Copyright 2020 PTI. All rights reserved. Republication or redistribution of PTI content, including by framing or similar means, is expressly prohibited without the prior written consent.
Related News: Acer India, Iconia, A500, W500, A300
SHARE THIS STORY
Print this article