Amid controversy over the finance ministry's note to the Prime Minister's office (PMO) on awarding licences for 2G spectrum in 2008, a joint parliamentary committee (JPC) is holding a two-day meeting on Tuesday and Wednesday. 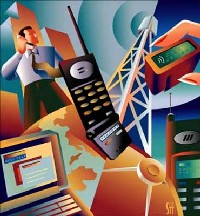 The JPC secretariat, in its communication to the finance ministry, has already sought a copy of the latter's March 25 note to the PMO.

The letter implies that former finance minister P Chidambaram, now the home minister, could have averted the awarding of 2G licences in 2008 at the price determined in 2001.

The committee, headed by Lok Sabha member P C Chacko, is mandated to inquire into the telecom licencing policy and the 2G spectrum scam.

The JPC meeting also assumes significance at a time when Prime Minister Manmohan Singh has come in the strong defence of Chidambaram and finance minister Pranab Mukherjee while ruling out the Opposition's demand for Chidambaram's resignation.

"The issue will certainly come up for discussion, as the JPC secretariat has already asked the finance ministry to submit the concerned note," a JPC member, who did not want to be identified said.

The committee would continue to cross-examine the former chairman of the Telecom Regulatory Authority of India (Trai), M S Verma, who headed the regulator between March 2000 and March 2003, when the Bharatiya Janata Party-led National Democratic Alliance (NDA)

Verma had already told JPC that the NDA government did not seek the opinion of the telecom regulator on the issue of allocating "excess spectrum" to some private companies in 2002.

While Trai has the powers to make recommendations on its own accord to the government, it did not do so.

Chacko had already revealed that during Verma's three-year tenure, Trai did not make any suo motu recommendations to the government on any issue. JPC would also continue questioning of Central Bureau of Investigation (CBI) during the meeting, the committee member said.

CBI has already informed JPC that it has so far seized 59 files of access service cell, 25 files of wireless, planning and coordination wing of the department of communications and carried out searches under section 165 of the Criminal Procedure Code at 21 places which include office premises of the various companies which got the letter of intent for unified access services licences.

The documents and files collected during investigation run into more than 100,000 pages and numerous witnesses had also been examined, he added.
Sanjay Jog in Mumbai
Source:

13/7 blasts: 'Investigators on the verge of cracking case'