'It was because of the huge selloff in the Indian equities that the rupee fell so sharply against the dollar on Friday.' 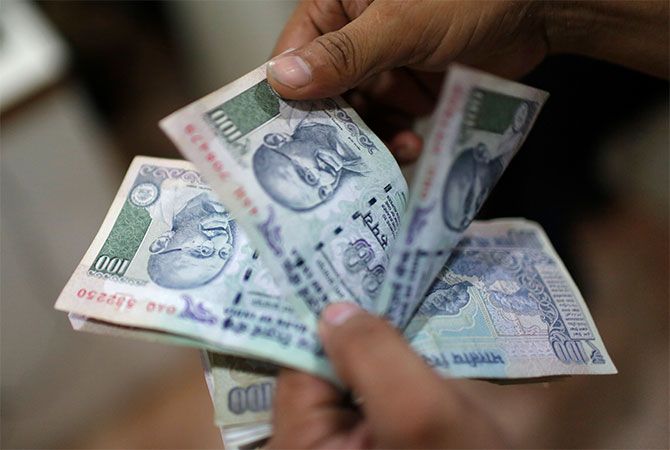 The selloff in the Indian equity markets on February 26 due to the scare set by rising US bond yields had its impact on the Indian currency too.

Come Monday, the Indian rupee and equity markets are expected to receive further pounding on the back of global fears of rise in interest rates in the US. Rahul Gupta, head of currency research at Emkay Global Financial Services, explains to Prasanna D Zore/Rediff.com the reasons behind the rupee's fall and the key level that the Reserve Bank of India, will be watching keenly in the week beginning March 1.

How do you look at the strength displayed by the US dollar against the Indian rupee on Friday?

We need to understand a couple of things. The increasing US bond yields is one of the major reasons why the US dollar will keep rising against the currencies of the emerging economies going ahead.

The US government is expected to announce a $1.9 trillion stimulus package soon. This has made market participants expect that the inflation rate in the US will rise pretty much faster than what was expected earlier.

If the inflation rises rapidly, the counter move by the US Federal Reserve would be rate hikes.

A couple of days ago, the probability of a rate hike by the US Fed in 2022 were nearly 30 per cent. Currently, that probability has spiked up to 70 per cent.

This means that there are higher chances of the US Fed going for a rate hike sooner than expected to keep the inflation rate under check.

Because of this sharp jump in the probability of a US Fed rate hike, bond yields across the world and the US jumped up very rapidly, which is helping the Dollar Index gain strength (against a basket of six global currencies and measures the strength of the dollar against these currencies).

As a result of this, all the currencies of major emerging economies took a sharp hit on Friday. The rupee too got a solid beating from the US dollar.

Due to this expectation of a rate hike, even the Indian equity market exhibited nervousness on the back of heavy selling in the US equity markets on Thursday (February 25) and Friday (February 26) and triggered a selloff in India.

Another reason why the rupee took a beating from the dollar is because the foreign institutional investors sold equity worth Rs 8,295 crore (Rs 82.95 billion) in the Indian markets and they would soon be demanding more dollars to take them out of India (the FIIs will sell the rupee and demand more of US dollars).

The third major reason for the rupee's fall was the absence of the RBI (the RBI intervenes whenever the rupee falls sharply by absorbing rupee's excess supply created by the FIIs who have sold Indian equities and now demand dollars to take them out of India) in the forex market.

To be very honest, this is a difficult call to make. Nobody in the world would know when or how the RBI intervenes or at what level it will intervene.

In case if the rupee closes above 73.70 in the spot market then we might be in for some trouble and 74.25 would be the next target.

At what level do you think the rupee will settle down against the US dollar?

Since the beginning of this calendar year I have not been a fan of the rupee appreciating against the US dollar because at every level the RBI was spotted in the markets trying to protect the rupee's fall.

I continue to hold the view that the rupee will further depreciate against the US dollar.

It was quite an extraordinary rally in the US dollar to see it strengthen by Rs 1.55 against the rupee (in the futures market). Gradually, I continue to believe that the rupee will keep depreciating against the dollar.

Generally, after such kind of a move, it is pretty much normal to have a retracement of almost 50 paisa.

There is chance that on Monday, or sometime next week, we may again see the rupee quoting at around 73.25-73.35 against the dollar and from there again a new rally in the dollar could start.

But wouldn't FIIs continue to sell Indian equities beginning Monday and move to the US in search of safety?

That's definitely a possibility but it is also possible that the RBI might intervene from Monday and try to protect the rupee's fall.

The RBI governor (Shaktikanta Das) has been pretty much on record since the past couple of weeks saying that they will keep the rupee stable and cut the volatility (in the dollar-rupee exchange rate).

That was the reason that market participants were expecting the RBI to come into the markets on Friday (February 26, when the rupee saw a sharp fall).

On that expectation, I am assuming that if the volatility increases further (in the dollar-rupee rate) the RBI will intervene sometime this week.

As I said, we don't know how and when the RBI would do it, or whether it will intervene at all also remains to be seen.

But if such kind of wild moves continue the probability of RBI stepping in will definitely increase to curb the volatility in the rupee and that would help rupee to appreciate to around 73.25-73.35 zone, but from there another rally in the dollar may ensue.

What kind of impact would this volatility in the rupee have on the equity market going ahead?

In the Indian market it would be the other way round because here the equity markets have a bigger impact on the currency rate.

It was because of the huge selloff in the Indian equities that the rupee fell so sharply against the dollar on Friday.

If the selloff continues next week beginning Monday (March 1), then, in my opinion, the rupee will continue to depreciate.