News
Business
Movies
Sports
Cricket
Get Ahead
Money Tips
Shopping
Sign in  |  Create a Rediffmail account
Rediff.com  » Business » 'We had surplus wheat stocks till last year, where has it gone?'

'We had surplus wheat stocks till last year, where has it gone?'

'All imaginary figures are pushed by government bureaucrats.'
'They never showed that the production of wheat was less this time.' 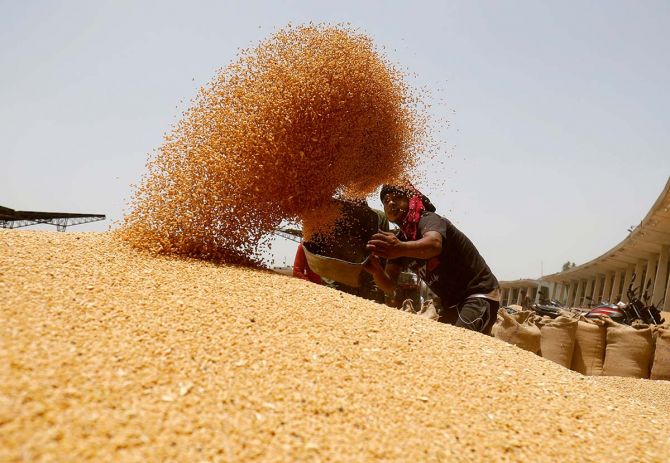 IMAGE: A worker sifts wheat at the market yard of the Agriculture Product Marketing Committee on the outskirts of Ahmedabad. Photograph: Pulitzer Prize Winner Amit Dave/Reuters

In April, Prime Minister Narendra Damodardas Modi announced that India was ready to supply food to the world if the World Trade Organisation permits it.

A month after that statement, the Modi government banned wheat exports with immediate effect.

This has hit Indian farmers as they earned good money by exporting wheat to the world.

There is a shortage of wheat in the world after Russia invaded Ukraine, both large wheat producing countries.

Syed Firdaus Ashraf/Rediff.com spoke to Anil Ghanwat, below, president of the Swatantra Bharat Party and senior leader of the Shetkari Sanghatana, the farmers' organisation, to understand why the Modi government banned the export of wheat, and what its impact on Indian farmers would be.

You have stated that a ban on wheat exports is tyranny for Indian farmers, but why should Indian consumers pay more money for Indian wheat?

India's wheat? It is the wheat that Indian farmers have produced and it is their wheat.

Before the exports were banned for wheat, Indian farmers were making good money for the first time after so many years.

The government then intervened and banned its export to control the price which will result in the price of wheat falling.

The government does not want farmers to earn any profit.

Farmers will now have to bear the losses because of the government.

If the government wants to feed Indian consumers and poor people, then why should the farmers do that charity? They (the government) want farmers to suffer.

Isn't wheat an essential item for every Indian household? I ask you this because by your logic Indian consumers will not be able to afford our own wheat.

Farmers must get the price that the international market is offering.

Just because India has poor people, it does not mean Indian farmers must sell their produce at lower cost. There is no logic in this argument.

This does not happen with any other product which is sold in country, so why wheat?

Our produce is auctioned and only then farmers know what is the right price of their wheat... Every other product has MRP.

Farmers don't have a choice of MRP. Whatever price the arthiya (middleman) decides, farmers get. The whole system is rotten.

The government's intervention in agricultural market must stop.

The government does not intervene in any other commodity market except agriculture, which results in suffering for farmers.

The price of flour has risen by 42 per cent in the past four years. The government is accountable to the people of India and need to control inflation.

That does not mean they must kill the farmers. 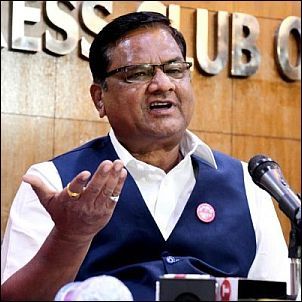 The government must come out in the open market and buy wheat from the farmers (at international prices) for Indian consumers.

We had surplus stocks till last year. Where have the stocks gone? Were the figures wrong then?

Last month, Modi said India is ready to feed its wheat to the world, and now he wants to ban wheat exports.

This has dented India's image internationally. If any country wants to trade with us in future, they will have to be certain that the Indian government will not go back on its word.

Sadly, even though India is an agricultural country, we still do not have any agriculture policy.

The unwritten agricultural policy is that loot the farmers and feed the poor of India to win elections again and again.

The government even takes away farmers' land at whatever price they want for building highways.

Farmers don't have a choice as they are treated like bonded labourers just to feed the poor.

Why has there been no farmers' protests after wheat exports were banned?

It is not easy to demonstrate as bringing farmers to one place is a difficult process.

One good thing that has happened to Indian farmers is that even after exports of wheat were banned, the price of wheat has not fallen drastically.

Traders who bought wheat at a higher price will not sell at a lower price now.

Right now, the situation for the farmers is good, but maybe after a week or two if the price of wheat crashes, farmers may hit the roads to protest.

Take the example of Indian onion, which was 80 per cent of the world produce.

Today, it has gone down to 40 per cent just because of the Indian government's uncertain trade policies.

Nobody in the world now wants to trade with us on onions.

Countries are looking for other options as they feel Indian onions will never reach them in spite of signing deals with Indian farmers.

Other countries have started producing Indian onions and exporting them to Gulf countries.

From Nehru to Modi, all PMs want Indian farmers to be poor.

Initially, Indian farmers thought that Modi was different, but they were proven wrong as he is following the same policy on farmers as the Congress did from Nehru to Indira Gandhi's time.

Farmers don't see any hopes from the BJP now.

We were told we had surplus wheat, so why was its export banned? Did the Modi government not have details of wheat production in India?

The reality is that we do not have good data collection or intelligence system in our country about farm produce.

All imaginary figures are pushed by government bureaucrats and they give wrong figures.

Everybody is shown a good picture, but in reality that is not true.

They never showed that the production of wheat was less this time.

Moreover, India gives 80 crore (800 million) people subsidised food grains, then obviously it is going to be a problem.

Do you think if the government was not forced to withdraw the three farm laws, it would not have banned wheat exports?

It was just a baby step which gave market freedom to farmers.

In the Essential Commodities Act, the Modi government had removed cereals, pulses, onions and potatoes from the list.

It was stated that if the price of onions and potatoes rose by 100 per cent, it would come under the Essential Commodities Act.

And if the prices of cereals and pulses rose by 50 per cent it would be put in ECA.

And here, in the case of wheat, the prices did not rise by 50 per cent and yet the government banned wheat export.

The price rise for wheat was 35 to 40 per cent. There was no need for the government to ban wheat export.

Today, even G-7 countries are criticising our decision to ban wheat exports.

India is the second largest wheat producing country in the world, but our wheat exports account for only 1 per cent. Why is it so?

Our ranking is 24th or 25th when it comes to wheat export statistics of the world.

We have the potential, but we are not allowed.

The government wants to stock Indian wheat in FCI (Food Corporation of India) godowns for only the rats to eat.

The bureaucrats give a false picture and narrative to the government who do not go against their will.

Technically, the FCI has no reason to store wheat in godowns.

The government can directly transfer money to poor people's accounts and let them decide what they want to eat rather than thrusting food in their mouths. They waste the taxpayers's money.

Is the situation so bad that the Modi government is now changing the allocation of 11 million tonnes of foodgrain for the PM Garib Kalyaan Yojana from wheat to rice? They are not giving wheat even to the poor.

Most of these grains which are given to PMGKY go back to the market as not many people eat them.

This was good during Covid times. The government should have stopped it after Covid, but they did not.

All ruling parties have the same strategy of feeding the poor and launching populist schemes.

They do not want farmers to prosper, which will result in the prosperity of India. Instead, all ruling parties feed the poor for free to win votes.

They did this for the last 70 years and kept winning elections.

They never look at the interests of the farmers.

If we go this way, then we will never become a developed country.

If farmers are allowed to earn profits, then they will buy white goods which will result in the booming of the economy.

Today, farmers don't buy refrigerators, washing machines or even mixer grinders. They don't have money to buy these goods.

If farmers earn profit and start buying these consumer goods, just imagine where our country will head to in terms of development. 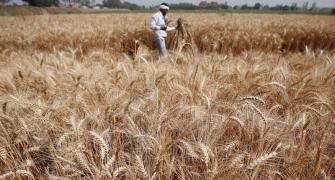 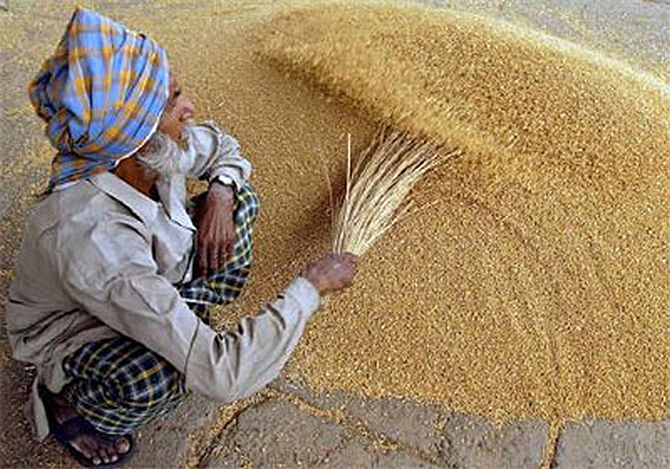