'Just see what kind of political, social and economic impact it will have when the number of unemployed goes up four times in one year suddenly.' 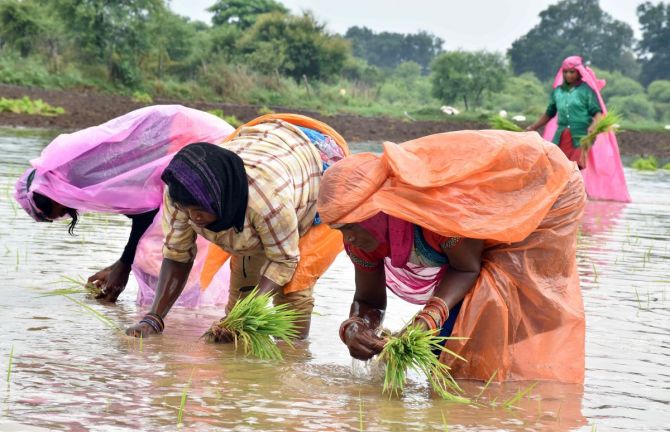 For the first time since 1979 the Indian economy has contracted, with the IMF predicting a contraction of up to 4.5% in the current financial year.

According to Dr Surajit Das, assistant professor at the Centre for Economic Studies and Planning at JNU, the economy will contract by MINUS 20% or so.

"Some of them (the unemployed) may even indulge in anti-social activities. Law and order situation will be out of control. Unless the government does something substantial..." Dr Das tells Shobha Warrier/Rediff.com. The first of a two-part interview:

You wrote soon after the lockdown was announced in March that it would lead to famine as more than half the population would not be able to stay at home for long. Five months have passed, and what does the survey you did on how the lockdown has affected the people, say?

Yes, I did write that the lockdown would lead to famine as 70% of our population is poor in this country, for all practical purposes.

We are conducting a telephonic survey in 13 states in India -- Telangana, Kerala, Rajasthan, Gujarat, Uttarakhand, UP, Ladakh, Sikkim, Tripura, North-Bengal, Odisha, among the migrant labourers of Bihar and that of Delhi.

After almost five months, what we have found out is, more than half the families we have spoken to have become directly or indirectly indebted because of the lockdown.

Most of those who have lost their income partially or fully, were working in the informal sector or unorganised sector. But their monthly expenditure has not come down.

Though it has come down slightly for some, it has gone up for many because of the increase in the prices of essential items.

In general, expenditure has not come down while income has fallen drastically.

Some of them could manage with their past savings, but that also has exhausted as the lockdown has been going on for five months.

They have become indebted to the house owners, grocery stores, etc. And many people have taken loans from friends, family members and money lenders.

Compared to many other countries, the number of people whose livelihood was affected, is more in India. Is it because of the wide social disparity that exists here?

Because of job losses and unemployment?

Not only because of job losses and unemployment, but because of the whole trajectory of neo-liberal economics in the current phase of capitalism, the inequality has increased.

The idea today is, if you give more money to the richest section of population, there will be more investment and more output which will result in more growth in the economy.

The assumption is that this will automatically lead to some trickle down to the poorer section in the society. But that trickle-down hypothesis has failed to happen.

Inequality has gone up all over the world, not just in India.

When inequality goes up, the vulnerability of the poorer section also will go up leading to more and more people becoming vulnerable.

On top of that, higher inequality reduces the aggregate demand relative to the potential output possible to produce with the existing productive capacity.

Is that the reason why we hear voices in support of protectionism these days? When the world is without borders, is it good for any economy to talk about protectionism?

I don't think there is a voice for protectionism. After the import liberalisation that had happened all over the world in the 1980s and early 1990s, it is impossible for any country to isolate itself and grow on its own in the current world order.

In this pandemic world, you can't rely on export-led growth alone because you can export only if there is demand elsewhere.

Now that the whole world is entering into a deep depression, import demand in all the countries will be lower.

Even if you restrict imports, it doesn't mean the export-import ratio of your current account balance will lead to higher growth.

If the lack of aggregate demand problem had happened in one country, you could export to another country, but this is a pandemic that has affected the entire world. Every country is suffering from demand depression due to this today.

Lack of demand was there in India even before the pandemic, and the situation has become worse now. Many economists were demanding direct cash transfer to increase demand, but nothing of that sort happened.
Now, growth is said to be the lowest since Independence...

Before the lockdown, India's growth rate came down to 4% of the GDP as per the government data.

We suspect the growth rate was even lower as the actual government data comes almost two years later.

These calculations of quarterly GDP are based on a lot of assumptions which are not very reliable and they were influenced by the earlier higher growth rates.

You mean, it must have been less than 4%? 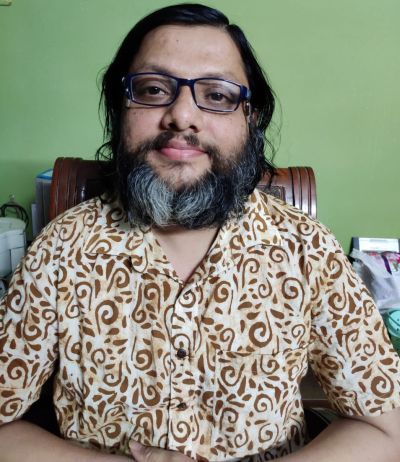 Yes. That's what many economists feel.

In the last 5-6 years, the wage rates, not just in rural India but urban India also, were not rising at all in real terms.

And this was happening when the per capita real growth rate was said to be 4% to 5%.

Obviously, inequality will go up as most people are wage earners.

This was the main reason for the lack of demand in the whole of the country.

The growth in aggregate purchasing power of the people came down because there was no change in the real wage rates at all.

When people do not have purchasing power, there will not be any demand.

When there is no demand, inventories will pile up.

When inventories pile up, investment rates will come down.

Then, growth rate will suffer and unemployment will go up, which, in turn, will affect the purchasing power of the people.

It is a vicious circle...

Exactly. It is a vicious circle.

Now, after the lockdown was imposed, in the first quarter of the financial year, that is, in the months of April, May and June, my sense is that the GDP has come down at least by half compared to the same period last year.

GDP coming down by half means -50% growth rate in one quarter which also means approximately -12.5% growth rate annually.

In the second quarter of this financial year (July, August and September) also, there will be negative growth, and most likely in the third quarter also.

One can hope that probably it will match with last year's quarterly GDP in the fourth quarter, -- 0% growth rate.

So, I would say the growth rate of the Indian economy in this financial year will be around -20%.

It is really huge; you are talking about 1/5th of the economy.

And if this happens, employment will come down by 20%.

This 9 crore unemployed will be added to the already unemployed 3 crore (30 million).

The small businesses of most of the self-employed people would suffer badly.

It is the highest since Independence...

Not just the highest. Just see what kind of political, social and economic impact it will have when the number of unemployed goes up four times in one year suddenly.

Some of them may even indulge in anti-social activities.

Law and order situation will be out of control. Unless the government does something substantial... 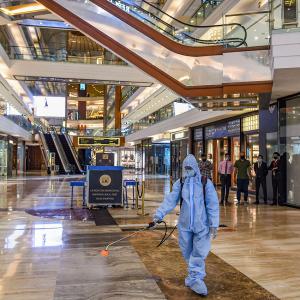