The RBI wants to include shares and options within the variable salary of the CEOs, proposed to be capped at 200 per cent of their fixed salary; the floor for it is 50 per cent.

Simply put, under the new plan, if a bank CEO gets a fixed salary of say Rs 1 crore a year, the variable portion can vary between Rs 50 lakh and Rs 2 crore, inclusive of shares or stock options that would be at least half of it, says Tamal Bandyopadhyay. 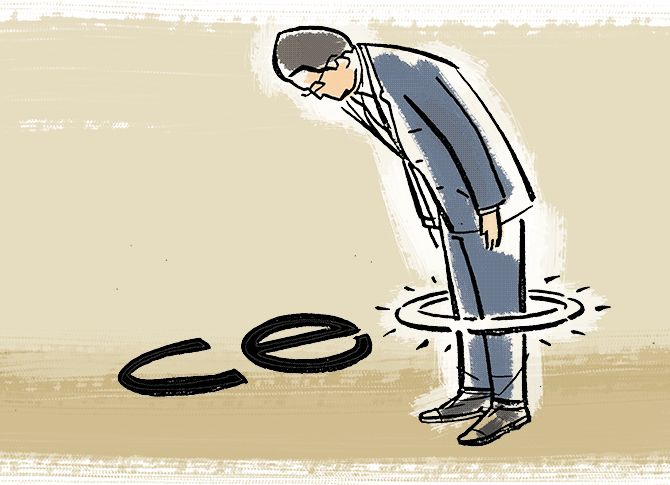 The CEOs of private and foreign banks in the world’s fastest growing major economy are a sulking lot these days as India’s banking regulator is planning to downsize their remuneration.

Those who always feel these bankers earn a lot, particularly in comparison to their counterparts in government-owned banks, some of which have much larger balance sheets, are watching them with voyeuristic glee.

Under India’s Banking Act, private and foreign lenders always need regulatory approval for the remuneration of whole-time directors and CEOs and the Reserve Bank of India (RBI) has not exactly been liberal in its approach.

Still, they manage to earn a decent (some say indecent) sum through stock options, which have been outside the remuneration package.

Now, the RBI wants to include shares and options within the variable salary of the CEOs, proposed to be capped at 200 per cent of their fixed salary; the floor for it is 50 per cent.

Also, at least half of the variable pay must be in the form of non-cash.

At the moment, the variable pay of the bank CEOs is capped at 70 per cent and there is no floor for it.

Simply put, under the new plan, if a bank CEO gets a fixed salary of say Rs 1 crore a year, the variable portion can vary between Rs 50 lakh and Rs 2 crore, inclusive of shares or stock options that would be at least half of it.

Going by the proposal, at least 60 per cent of the total variable pay must be deferred for a minimum of three years.

Also, there should be a clawback agreement forcing a CEO to return already-paid remuneration under certain circumstances as well as malus, denying the CEO deferred remuneration if the bank is not disclosing bad assets and setting aside money for them.

The RBI also wants the banks to identify the so-called material risk takers or MRTs among the senior employees whose actions have a bearing on a bank’s performance.

If at all, the RBI could have looked into this much earlier as a few Indian private banks have not exactly been reverent about corporate governance.

The plan to deny the bank CEOs full remuneration through the exercise of the claw back and malus clauses if they jeopardise a bank’s health by taking excessive risks or hiding bad assets is welcome.

Similarly, identification of MRTs for special treatment, on the line of the UK regulator Financial Services Authority’s focus on persons of significant influence, is also welcome.

However, if the regulator takes upon itself the job of structuring the CEO’s salary to the last detail, what is the remuneration committee of a bank’s board for?

How are banks expected to react to this?

They are likely to raise the fixed component of a CEO salary.

My understanding is that to protect the existing compensation, some private banks will have to raise the fixed salary of their CEOs by as much as 50 per cent.

This is what the CEOs of European banks have done.

This negates the very purpose of the regulator as a more assured payment protects a large chunk of remuneration even if a CEO is taking excessive risks!

Besides, it can also breed complacency and inefficiency and discourage the strive for excellence at the top job.

Of course, this thesis is based on the presumption that the RBI does not plan to do both -- overseeing the composition of the compensation package as well as fixing the absolute sum.

How does one value the stock options?

If a CEO gets vanilla shares in the form of restricted stock units, it is easy to value them as the executive enjoys the economic benefit of an entire share of stock but in the case of an ESOP, an employee has the option to purchase stock of a company at a future date at a predetermined price.

If the market price of the stock is above the procurement price, the employee stands to gain by selling it off but if it is below the agreed price level, the employee will not exercise it.

Indeed, there is a formula for calculating the fair value of an option but the market performance of Indian private banks is not uniform.

For instance, an HDFC Bank employee has always been in the money as the stock has been consistently doing well but ICICI Bank employees have hardly made any money in past few years and Yes Bank stock has lost 40 per cent in the past seven months.

Also, if a stock is doing well, shouldn’t the CEO be compensated handsomely as this is a testimony to the manager’s great work?

Ultimately, the board and the investors should take the call on a CEO salary; if or when the board is compromised, the RBI should step in.

Also, the size of balance sheet alone cannot determine compensation; the challenge and complexity of the job should also be factored in.

Stock offerings have turned many professionals into entrepreneurs in India, created fine banks and revived falling ones.

While there must be disincentives for excessive risk takers and punishment for those who do not believe in good governance, the regulator must assure the performers that they don’t need to worry.

Otherwise, the best bankers may migrate to greener pastures -- the non-banking finance companies, insurance firms and even FMCG and infotech sectors.

Incidentally, the compensation structure of the CEOs of India’s public sector banks needs to be recast without delay, if we care for performance.

It needs to be delinked from bureaucrats’ salary.

And, the ESOP proposals of at least two such banks have been lying with the finance ministry for years now.

Has anyone heard on this?