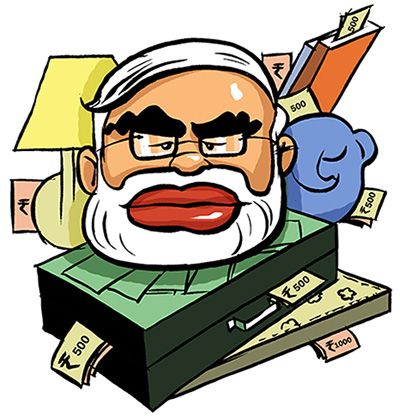 Demonetisation of the old Rs 500 and Rs 1,000 notes -- specified bank notes (SBN) henceforth -- accounting for over four-fifth of currency in circulation on November 8, 2016, was described by critics as an 'all-India unannounced strike', 'organised loot and legalised plunder' and a hasty decision.

Did demonetisation produce only the painful cash shortage until March 13, 2017 and disruption of economic activity?

The Reserve Bank of India's annual report for 2016-17 and the Central Statistical Organisation's estimate of gross value added (GVA) in the first quarter (Q1) of the current year contain useful pointers.

Cash lubricates the wheels of business.

Growth of GVA at constant prices was affected by the post-demonetisation cash shortage.

Indeed, a part, but not the entire decline, is due to demonetisation.

Even without demonetisation, an underlying declining trend was at work with a slowdown in investment.

This investment slowdown in turn was on account of what the RBI calls 'waning business confidence and flagging entrepreneurial energies', or the Economic Survey, 'the twin balance sheet problem'.

Furthermore, the soft credit market conditions with the post-demonetisation liquidity surge in banks should have partly contained the fallout of demonetisation.

CSO's recent release indicates that such growth remained unchanged at 5.6 per cent in Q1 of 2017-18.

Now with cash shortage a thing of the past, will the dividends follow from a more honest tax culture, a less cash-intensive economy, and lower threat of fake Indian currency notes (FICN)?

It was expected that for fear of detection, a large amount of 'black money' circulating as SBN would not come back for exchange or as deposits in banks.

The report does not have the figure of how much SBN was circulating on November 8, 2016.

Taking the figure as Rs 15.44 lakh crore, as provided by the minister of state for finance in the Rajya Sabha on November 29, 2016, almost 99 per cent came back two months ago.

The enthusiasm to come clean by paying 50 per cent tax and depositing 25 per cent without interest for four years under the Taxation and Investment Regime for the Pradhan Mantri Garib Kalyan Yojana, 2016 (PMGKY) before March 31, 2017 was limited.

Deposit was only around Rs 5,000 crore under the PMGKY.

The holders of black money in the form of high-value SBN exchanged or deposited the SBN at banks, before the window for doing so closed and SBN turned into waste paper.

Clearly, they were not deterred by the risk of detection and the penalty if detected.

Will the unscrupulous braves rue their calculation of the risks and penalties?

Information exists on who deposited how much SBN at banks before December 31, 2016.

Prime Minister Narendra D Modi told the nation on Independence Day that more than Rs 1.75 lakh crore of such deposits are under 'the scanner'.

If there is any truth in the allegation that the decision to demonetise was hasty, declaring the demonetisation a complete failure now may turn out to be equally so.

The past pain of demonetisation will appear tolerable, and even worth suffering, if and when the people are informed about tax evaders successfully detected, the amounts involved and the resultant penalties.

Remonetisation has entailed additional cost of printing and distributing the new notes.

Currency in circulation, after declining precipitously right after November 8, 2016, has revived with remonetisation.

The fillip to the digital payment mode from demonetisation is welcome.

However, it also reduces the RBI's income.

The RBI uses currency in circulation -- a non-interest bearing liability -- to acquire income-yielding assets such as government securities and loans to banks.

Furthermore, a decline in currency also increases the money multiplier with implications for monetary planning.

The RBI's annual report has a cryptic discussion of how the money multiplier has changed as a result of the decline in currency, but is silent on the implication for the central bank's net income, going forward.

Demonetisation also had the objective of curbing the menace of FICN.

The FICN problem has still not assumed disastrous proportions.

It is reassuring like the doctor ruling out, after a medical test, the risk of an immediate cardiac arrest.

Like the medical test detecting some troubling signs like elevated LDL cholesterol level, demonetisation has allowed the RBI's annual report to provide some rich insights on FICN from the two-stage-cluster-sampling-based scrutiny of SBN at currency chests and at the RBI.

Hitler's effort to flood the United Kingdom with fake pound notes during the Second World War or Stalin's effort to counterfeit $100 notes in 1928 were nipped in the bud only by timely action.

Geopolitics being what it is in the sub-continent, the useful post-demonetisation insights about FICN need a careful follow-up. 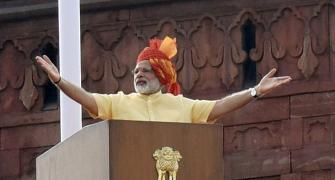