The Union Budget seems to have elicited a starkly opposite view from rural India compared to urbanites, says Mahesh Vyas. 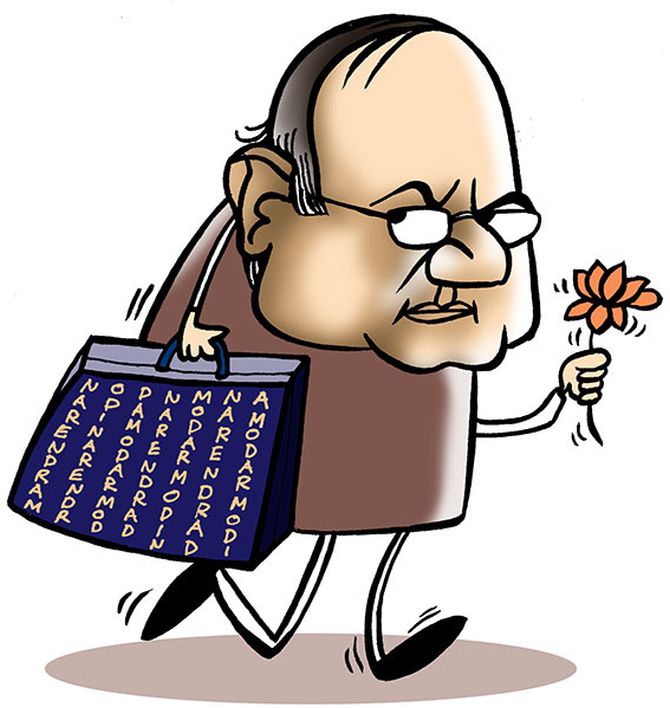 Budget 2018 is populist in at least two of its major measures.

It promised returns of 50 per cent on production of agricultural crops and a health insurance policy that is touted as bigger than Obamacare.

The bombast has worked on the electorate.

The consumer sentiments index went up by 3.8 per cent on February 1, the Budget day, when the announcements were made.

Note that the 50 per cent mark-up on the cost of crop production was announced early in the Budget speech -- well before noon -- and so, the impact of this was felt during the course of the day.

We surveyed and got responses from 975 households on Budget day.

Of these, 351 responses were from rural regions and the remaining 624 were from towns.

The responses were sharply divergent between rural and urban regions.

The consumer sentiment index in rural India shot up by 8.7 per cent on Budget day.

And, on the same day, the consumer sentiment index for urban India fell by 4.8 per cent compared to the index of the previous day.

The Union Budget therefore seems to have elicited a starkly opposite view from rural India compared to urbanites.

Rural India has a quick understanding of the meaning of a 50 per cent return on cost of production.

Different people possibly have different interpretations of cost of production.

But to each, the meaning of a 50 per cent return on their understanding of cost of production is music to their ears.

So, respondents unhesitatingly gave a thumbs-up.

Experts can keep figuring out whether this is A2 plus FL (operational cost including cost of family labour) or whether it also includes fixed costs and so on and so forth.

Farmers’ demand of a 50 per cent return on cost of production had turned into a political movement.

This was one of the recommendations of the M S Swaminathan committee and most farmer organisations had made this one a rallying points in their various agitations.

Their political pressure seemed to have had sufficient impact for the government to make a dramatic announcement.

Urbanites did not bite the bait of Modicare or re-introduction of standard deduction or lower direct taxes on small and medium-sized companies.

Nobody likes to anticipate a hospitalisation and so cannot tangibly connect favourably with the proposition.

By the end of the Budget week, sentiments had sobered a bit.

The consumer sentiment index was 0.6 per cent higher in the week ended February 4 compared to its level in the preceding week that ended on January 28.

The rural index was up 3.5 per cent while the urban index was down 3.4 per cent.

The sharp divergence in rural and urban sentiments remained intact but the degree of the divergence narrowed somewhat.

Last week’s divergence apart, rural and urban sentiments have diverged substantially over the past two years.

The same was much lower at 91.0 for urban India.

Farmers' lobbies have managed to get governments to waive loans, give higher prices for farm produce and implicitly make promises to the various farm organisations.

All these give-aways, promises and now an entitlement from the finance minister have helped keep rural consumer sentiments buoyant.

The announcement in Budget 2018 seems to deliver on the several promises made to the farm lobby in the recent past.

Urban India does not have a corresponding lobbying power to extract similar largesse.

Nobody demanded Modicare and apparently, nobody cares.

On jobs, the optics were not about providing jobs but about the success of the government's policies towards creating formal jobs.

The government has a narrative -- that an estimated 7 million jobs are believed to be created in the formal sector during this financial year.

Budget 2018 continued to pursue this narrative.

The finance minister took the narrative further and went on to claim and that this is a reflection of the success of government's programs to generate formal jobs.

Central government jobs were declining for a long time. But, recently there has been some increase.

The average increase in employment during Modi sarkar times has been just about 70,000 per annum.

This is small but, it is much better than any time in the past 17 years. 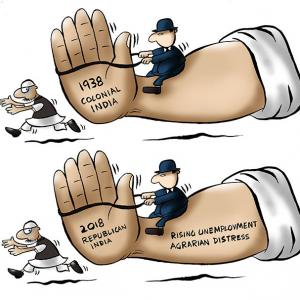