'Surplus money in individuals' pockets has moved away from real estate and flowed into the stock market either directly or through mutual funds.'
'This being one reason for the continuing surge in stock prices.'
'Market indices have soared to levels that are well above historical averages for price-earnings ratios.'
'Market pundits insist that this is not a stock price bubble, but when was the last time the pundits called a bubble a bubble?' asks T N Ninan.
Illustration: Dominic Xavier/Rediff.com 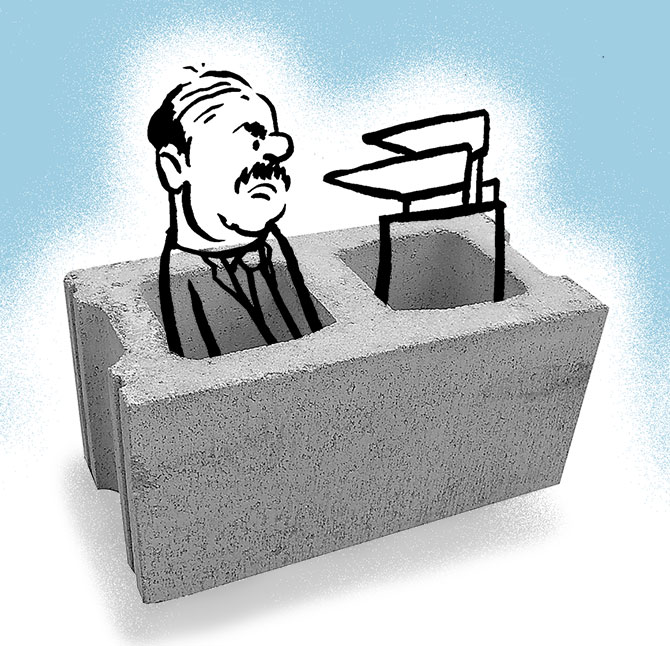 The economy has been struggling with a twin balance sheet problem these last few years, that of banks and of companies.

What observers have not explicitly recognised is the third set of balance sheets that are also weighed down -- those of high-net worth individuals, many of whom have invested in real estate and lived to regret it as building projects have remained half-built, and/or as prices of finished properties have continued to slide to a level where they are now 25 per cent or more below their peak.

In South Delhi, the price dip from the peak is more than 40 per cent.

Even those willing to take a sharp hair-cut in order to get rid of unwanted assets find that there are no buyers.

Real estate companies report surplus housing stock that will take many years to be absorbed by even a normal market.

The first is that surplus money in individuals' pockets has moved away from real estate and flowed into the stock market either directly or through mutual funds.

The result is growth of between 20 per cent and 30 per cent in the assets managed by the funds, this being one reason for the continuing surge in stock prices.

Market indices have soared to levels that are well above historical averages for price-earnings ratios -- by about 20 per cent.

Such valuations might be justified if the corporate sector were expected to do a quick rebound, so that earnings accelerate up the charts, but the number of commentators who expect that to happen has been shrinking.

Market pundits insist that this is not a stock price bubble, but when was the last time the pundits called a bubble a bubble?

The second consequence of this third balance-sheet problem is the sharp contraction in construction activity which also happens to be the largest employment sector after agriculture.

These consequences of the unreal real estate boom of a decade ago will be with us for a while, just like the other two balance sheet problems.

That's partly because real estate prices continue to be too high, especially at the top end of the market, and need to correct some more.

The usual yardstick for judging price reasonableness (or affordability) is how many years of a household's earnings would be required to buy a dwelling unit.

There was a time when this was reckoned at three or four years' earnings, with the US among the most attractive markets from this point of view.

But these price levels became history as, around the world, real estate prices rose for a long time at a much higher rate than salary increases. In many countries, that continues to be the case.

In India, prices have been correcting for at least five years, perhaps more.

Also, as interest rates have slipped, the monthly instalments on housing loans have come down.

In the more distant suburbs (more correctly called exurbs), prices in the economy segment hover around the Rs 5,000 to Rs 6,000 level for a square foot of built-up area; a relatively modest 1,200 square foot apartment would therefore cost Rs 60 lakh to Rs 70 lakh (Rs 6 million to Rs 7 million) in areas surrounding Delhi (like Sonepat, or along the still unfinished Dwarka Expressway). But these are areas still undeveloped and therefore not strictly livable.

Get closer to town and prices shoot up.

The second test of price reasonableness has to do with rental income.

Before the boom of a decade ago, an investor could expect to get rent that translated into 3 to 4 per cent of the value of the housing asset (a steady asset price increase was expected to double that rate of return).

The rental return slipped to 2 per cent and then 1 per cent with no top-up through asset price increases; even now, after price correction, it is usually no more than 2 per cent -- partly because there is surplus supply in the market.

One should expect a recovery in the housing market only if a combination of the following happens: Prices fall to distress levels, interest rates dip further, incomes and rentals rise, metro transport networks reach out to the exurbs, and stock prices take a tumble.